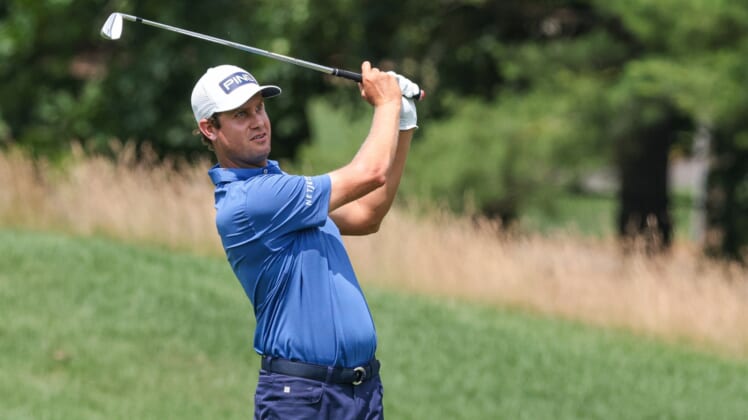 Harris English outdueled Kramer Hickok in a marathon eight-hole playoff on Sunday to win the Travelers Championship at Cromwell, Conn.

English won on the 26th-hole of the final round when he made a 16-foot birdie putt on the 18th hole. It is the 31-year-old’s second victory of the season and fourth career win on the PGA Tour.

The 29-year-old Hickok, who was seeking his first PGA Tour win, forced the playoff by sinking an eight-foot birdie putt on 18. He shot a 3-under 67 and English shot 65 through 18 holes to finish the four rounds at 13-under 267.

“Kind of sorry it took seven or eight holes, but we were both grinding,” English said afterward. “Kramer is a hell of a competitor. We were both fighting to the end and that’s what you want.”

The only longer sudden-death playoff in PGA history was when Lloyd Mangrum and Cary Middlecoff were declared co-winners after 11 playoff holes due to darkness in the 1949 Motor City Open in Northville, Mich.

Australia’s Marc Leishman shot a final-round 64 and finished one shot back in third. Mexico’s Abraham Ancer (65) was fourth at 11 under.

Bubba Watson, who shared the third-round lead with Hickok, collapsed over the final five holes. Watson shot 6-over during the stretch with a double-bogey and four bogeys holes to finish at 3-over 73 for the round and a tie for 19th at 7-under 273.