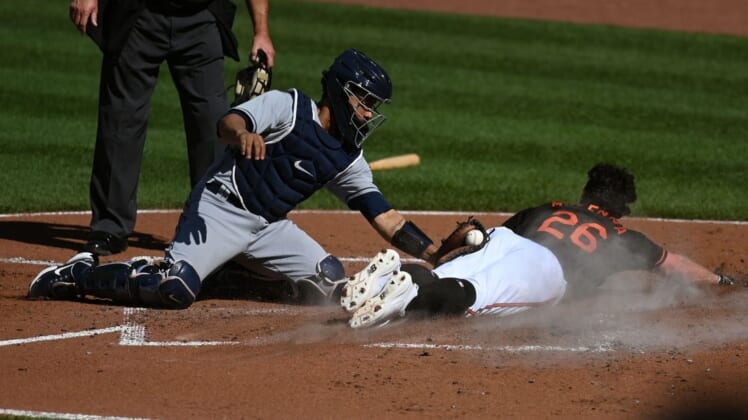 Harold Ramirez drove in three runs, including a go-ahead sacrifice fly in the top of the ninth inning, and the visiting Tampa Bay Rays snapped a four-game losing streak with a 7-6 win over the Baltimore Orioles on Saturday.

Robinson Chirinos had three hits and four RBIs for Baltimore, which rallied from a 6-2 deficit to tie the game in the sixth inning. Tampa Bay loaded the bases with one out in the ninth against Dillon Tate (0-3) and moved ahead when Ramirez’s fly ball to right field easily scored Yandy Diaz from third.

Ji-Man Choi hit a two-run homer for Tampa Bay, which recorded 14 hits after scoring a total of four runs in its past four games. Manuel Margot drove in two runs and Diaz had three hits and three runs.

Tampa Bay used six relievers, including Calvin Faucher (1-1) and Colin Poche, who pitched a scoreless ninth inning for his fourth save.

Rays starter Jeffrey Springs extended his scoreless innings streak to 13 1/3 before running into trouble in the second. Tyler Nevin hit a leadoff single and moved to second on Ryan McKenna’s bunt single before Chirinos followed with a two-run double.

Tampa Bay pulled even in the third against Baltimore starter Kyle Bradish, who began the inning by allowing back-to-back singles to Francisco Mejia and Kevin Kiermaier.

Margot tied the game with a two-run double and moved to third on Diaz’ single. Bradish retired the next two batters before Ramirez doubled in two runs. Bradish escaped further damage when Ramirez was thrown out attempting to reach third base.

The Rays moved ahead 6-2 in the fifth after Diaz hit a leadoff double and scored on Choi’s two-run blast to right-center field.

Bradish departed after allowing six runs on 11 hits over 4 1/3 innings with one walk and three strikeouts.

Baltimore battled back with three runs in the bottom of the fifth. Springs was replaced by Matt Wisler after allowing Ryan Mountcastle’s one-out RBI single. With the bases loaded and two outs, Chirinos delivered a two-run single.

Springs allowed four runs on seven hits over 4 1/3 innings. He walked one and struck out six while throwing 86 pitches.

The Orioles tied things up with two outs in the sixth against Ryan Thompson. Trey Mancini reached first on shortstop Taylor Walls’ error, Mountcastle walked and Anthony Santander singled in the tying run.