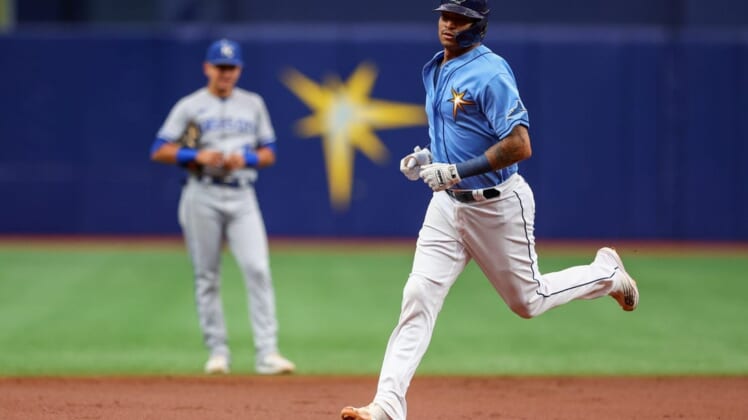 Harold Ramirez went 3-for-4 and knocked in two runs, including the game-winning RBI in the fifth inning, as the Tampa Bay Rays beat the visiting Kansas City Royals 3-2 Sunday in St. Petersburg, Fla.

The outcome handed the Rays a win of the season series. They went 4-3 and were victorious in three of their four home games.

Christian Bethancourt hit a solo home run Sunday, Brandon Lowe had two hits and a run, and Randy Arozarena posted a hit, walk, run and stolen base as Tampa Bay improved to 7-2 over its past nine games.

Rays starter Ryan Yarbrough lasted 4 1/3 innings and yielded two runs — both unearned — on three hits. He struck out five and walked one.

In relief of Yarbrough, Shawn Armstrong (2-1) threw 1 1/3 hitless innings for the win.

Kansas City’s Bobby Witt Jr. and MJ Melendez each produced doubles, but the club totaled only four hits for the third straight game and lost for the sixth time in seven outings.

Royals starting pitcher Zack Greinke was attempting to win in the domed stadium for the first time in his 19 years in the majors but was removed after allowing two runs on five hits in four innings.

Arozarena got it going for the Rays in the first inning by lining a two-out single past Greinke and then stealing second base. Ramirez followed with a grounder inside first base for a quick 1-0 lead for the wild-card contenders.

Greinke ran into two-out problems again in the second when Bethancourt homered to left-center, a 107.6 mph rocket that traveled 399 feet for a 2-0 Tampa Bay lead. The shot was the catcher’s seventh of the season and the third with the Rays since being acquired from Oakland.

But the visitors got to Yarbrough in the fifth, aided in part by Lowe’s second error – a throwing one – that allowed Kyle Isbel to reach second.

Melendez then ripped an RBI single off Ramirez’s glove, scoring Isbel to make it 2-1. Nicky Lopez barely beat Arozarena’s throw home on a shallow sacrifice fly to even the game.

However, Ramirez’s third hit in the bottom of the fifth, a single off Jose Cuas (2-2), made it 3-2, though a line-drive double play to first base ended any more damage.

Rays Pete Fairbanks was perfect in the ninth, recording one strikeout, for his fourth save.