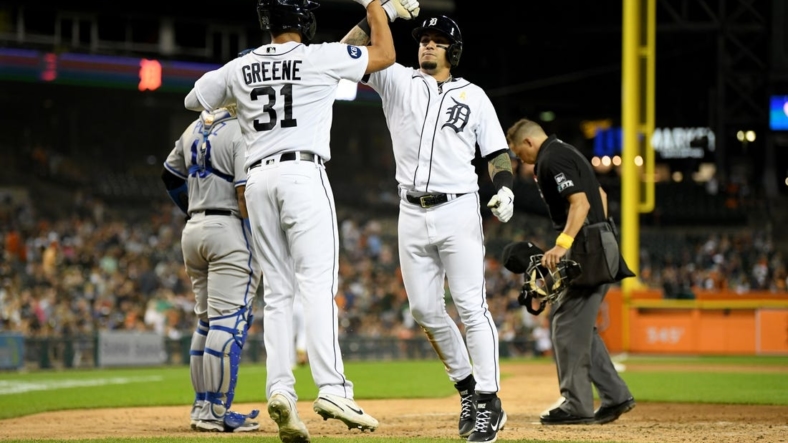 Pinch hitter Harold Castro hit a go-ahead single in the seventh and the host Detroit Tigers topped the Kansas City Royals 5-4 on Friday.

Detroit catcher Eric Haase was removed after the first inning due to a lower abdominal contusion. He was struck by a Salvador Perez foul ball. Perez had to exit in the sixth after getting hit by a pitch.

Kansas City scored a pair of two-out runs in the second. Michael Massey defied the shift with a bunt single, moved up on a Hunter Dozier hit and scored on Isbel’s single to right-center. When Greene booted the ball, Dozier scored and Isbel advanced to third.

Detroit had two baserunners in the fourth but the first was erased on a double play and the other was left stranded at first.

The Royals had runners on the corners when Isbel and MJ Melendez hit singles in the fifth. Hutchison got out of that jam by striking out Bobby Witt Jr.

The Tigers solved Lynch in the fifth.

Castro put Detroit on the board with one out when he lined a Lynch slider over the left-field fence. Castro’s long ball was his sixth this season.

Kreidler and Greene walked and advanced on a balk. Victor Reyes knocked in Kreidler with a sacrifice fly and Baez clubbed his 12th homer on a full count to give his team a 4-2 lead.

Taylor’s ninth homer, with one out in the sixth, knotted the score.

Detroit regained the lead in the seventh. Kreidler walked, moved up on Reyes’ infield single and scored on Harold Castro’s single down the third-base line.