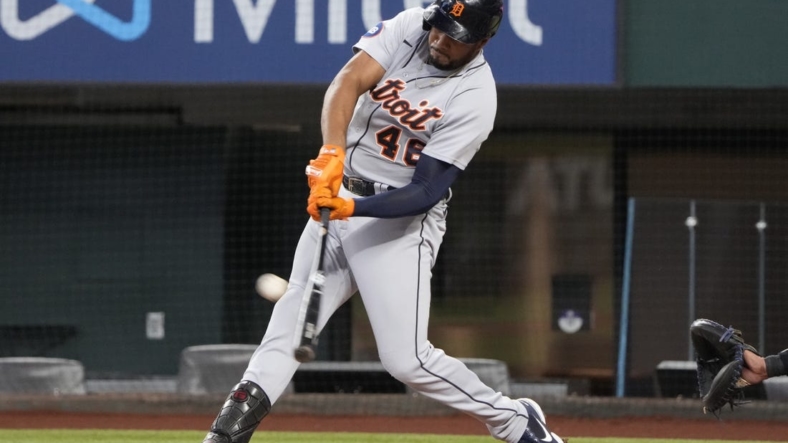 Harold Castro drove in five runs and Jeimer Candelario belted a two-run home run on Sunday afternoon and the Detroit Tigers held on for a 9-8 victory over the Texas Rangers in Arlington, Texas.

Right-hander Drew Hutchison (2-7) gave up two runs in 5 1/3 innings for Detroit, and picked up his first win since July 5 against the Cleveland Guardians.

For Castro, who had not had more than two RBIs in any game this season, the five are a career high. In 2021, the Tigers’ first baseman had as many as three, done twice.

The Tigers stormed out to a nine-run lead, but the Rangers, behind two home runs by Corey Seager, responded to make it a one-run loss.

Seager’s two-run homer in the ninth inning made it 9-8. The Rangers had the tying run at second base but Joe Jimenez locked down his second save.

Kole Calhoun added a two-run homer in the eighth inning for the Rangers. In the sixth inning, Seager and Nathaniel Lowe went back-to-back.

In the second inning, Arihara put himself in a bind when he hit Eric Haase with a pitch. Kerry Carpenter opened the scoring for the Tigers with an RBI double. Candelario’s two-run homer was his 12th and made it 3-0.

In the third inning, Kody Clemens drew a bases-loaded walk, giving Detroit a four-run lead. Arihara labored throwing strikes in the inning, as he walked two and gave up two singles.

The Tigers chased Arihara in the fourth inning after Riley Greene’s one out single, and Victor Reyes’ double. Brett Martin entered in relief, and Castro laced a two-run single to center, with the runs charged to Arihara.

Castro came up big again in the sixth inning, with a three-run double off left-hander Brock Burke, breaking open a nine-run lead.