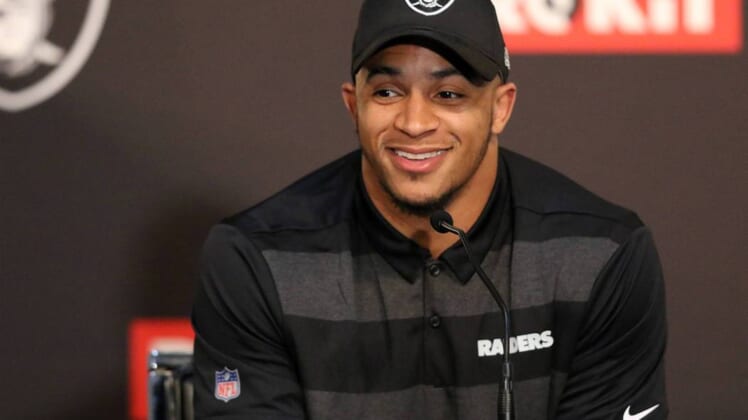 In the Raiders debut on the HBO series, the frustration over Antonio Brown’s injury and the personality of a rookie draft pick dominate the storyline.

The first episode of this season’s HBO series Hard Knocks corrected a recent error in judgment by its producers NFL Films – the voice of legendary narrator John Facenda was back in the form of the Oakland Raiders religious verse The Autumn Wind, thus beginning the chronicling of the team’s 2019 training camp on the right foot.

While that classic restored may have been starting the show on the right foot, feet were one of the big downsides to Episode #1. Particularly the feet of all-everything wide receiver Antonio Brown.

Brown’s limited availability and issues with his feet were one of the two dominate storylines throughout this opening salvo. The frustration with his inability to get on the field was palatable. Not only in what coach Jon Gruden and his staff said, but also via the body language and sheer frustration on their faces. They know they are a completely different team – and a better team – with Brown on the field.

That’s what people need to understand: the frustration isn’t with the sometimes flamboyant and boastful Brown as a person or personality. It’s a frustration with his lack of availability. Whether or not that builds into the former over time remains to be seen and will most certainly stay center in the story during the series run.

Despite that very serious and important storyline, rookie safety Jonathan Abram stole the show. With humor, his affinity for sweets and snacks, and his downright birth-right like nastiness in old-school Raider tradition, was the highlight of the episode. Particularly his desire to want to hit people on the field despite the team not yet being in pads.

It was his frank and open conversation with Gruden that was very telling. You had the Jedi Master telling the Padawan he needed to let up and save his anger for when it really matters. Gruden telling Abram to save it and not hurt his own teammate. Then Abram telling his coach if he happens to wrap someone up and the fall over, is it really his fault?

The beauty of that scene was Gruden’s sincere direction to his young player to layoff – for now. To realize there’s a time to use that aggression and strength but it’s not against your own team in helmets and shorts. Conversely, Gruden obviously loving inside he’s found a young player who embodies the spirit of Raiders from an era long ago.

Abram continues to be the cutup when Derek Carr takes the rookies to dinner telling Carr he skipped meals all day just to eat as much as he could on the QB’s dime.

Abram continues to earn praise from his rookie classmates and veterans alike who credit him for his smarts, hard play, and maturity.

Here’s our random takes from Episode #1 as well. We will discuss more about the show, including the portions on Carr and Richie Incognito, on our Sunday CBS Sports Radio 1140 show in Las Vegas. You can also stream that show nationwide on the Radio.com app.