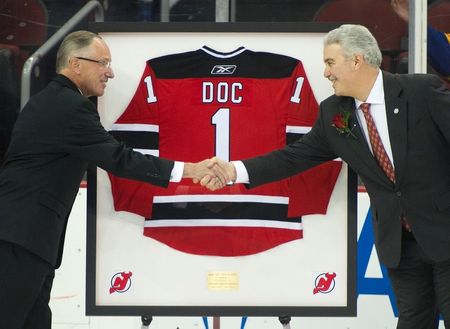 The main voice of NHL games on NBC since 2011 and the New Jersey Devils’ play-by-play man for two decades before that, Emrick estimates he called more than 3,750 games.

“It was 50 years ago this fall, with pen and pad in hand at old Civic Arena in Pittsburgh, I got my first chance to cover the National Hockey League,” Emrick, 74, said in a video released by NBC Sports. “Gordie Howe was a Red Wing, Bobby Hull was a Blackhawk, Bobby Orr was a Bruin. … A time like this makes me recall that we have seen a lot together.”

“The risk one takes in saying something about Doc Emrick is that you know he could have worded it better himself, on the spur of the moment, with 20,000 fans screaming in his ears (or up to 105,000 in the rain, snow and/or bitter cold), to a national broadcast audience relying on him to get it just right,” NHL Commissioner Gary Bettman said in a statement. “In the 103-year history of the National Hockey League, nobody has ever conveyed the sights, sounds, passion, excitement, thrills and intricacies of our game better.”

“Things change over 50 years, but much of what I love is unchanged from then to now and into the years ahead,” Emrick said. “I still get chills seeing the Stanley Cup. I especially love when the horn sounds, and one team has won and another team hasn’t, all hostility can dissolve into the timeless great display of sportsmanship — the handshake line.

“Sixty years since I saw my first game, 50 years since I first reported on the NHL, 40 years of calling NHL games. … I leave you with sincere thanks.”