Hall of Famer on Carmelo Anthony: ‘I don’t think he’s the problem’ 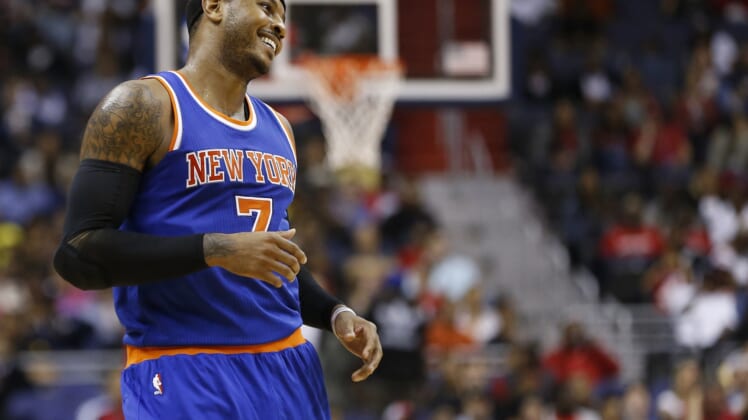 The New York Knicks will assuredly look to trade star forward Carmelo Anthony this summer. It’s something team president Phil Jackson has repeatedly indicated publicly. For both the Knicks and the future Hall of Famer, a parting of the ways seems to make the most sense.

This comes after a drama-filled 2016-17 season in which both Anthony and Jackson were seen flinging mud at one another publicly. The situation just isn’t sustainable over the long term.

Most people close to the situation have decided that Jackson, not Anthony, is to blame for what promises to be an ugly divorce.

We can add Pro Basketball Hall of Famer and current Knicks analyst Clyde Frazier to that group of people.

“I would like to see Melo stay,” the MSG Network commentator said, via ESPN. “There’s a lot of negativity going on right now, so I don’t know. I don’t think he’s the problem. They have to improve defense, get some more talent, and having Melo would be fine.”

In a vacuum, Frazier is 100 percent correct here. Anthony’s presence on the Knicks would only help the team get out of its current rut. Though, there’s also a scenario in play here that suggests moving on from the old guard makes the most sense. New York seems intent on building around young big Kristaps Porziņģis.

The larger issue at hand here is Jackson’s actions. His “public shaming” of Anthony has seemingly weakened the trade market for the All-Star. If trading Melo for pennies on the dollar is the end result here, that’s not going to help the Knicks improve off last season’s 31-51 mark.

It will definitely be interesting to watch as free agency gets going this upcoming summer.