Ford Performance announced Saturday afternoon that Hailie Deegan would run full-time with DGR-Crosley in the NASCAR Truck Series in 2021. 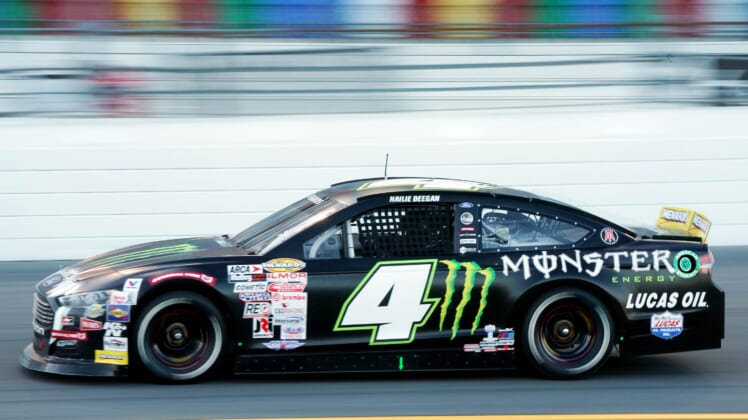 Hailie Deegan might be one of the most recognized drivers in the lower ranks of NASCAR. She is also the most popular women driver in NASCAR. She will now be making her way into the NASCAR Truck Series in 2021.

Here is what this surprising move means for Deegan.

Is Hailie Deegan ready for a move to the Truck Series?

Hailie Deegan ran the full schedule for the ARCA Menards Series this season. During the season, Deegan posted four top-five finishes along with 17 top-10 finishes. She finished third in the standings, although, the field was not as large as in previous years due to the COVID-19 pandemic.

Deegan was unable to win a race during the season. Taylor Gray, her 15-year-old teammate at DGR-Crosley, posted twice as many top-five finishes in eight fewer races. Many have been critical of Deegan and whether she is ready for such a massive jump. I think she should have waited another year and ran part-time trucks and ARCA, due to her lack of seat time.

However, Deegan will now run full-time next year in the NASCAR Truck Series. Whether this is the right move remains to be seen.

Will Deegan be able to compete in DGR-Crosley equipment?

The first question many will wonder is whether Deegan can compete for wins in 2021. DGR-Crosley does not have a long history of winning in the NASCAR Truck Series, but on multiple occasions, they have consistently run top-5 and top-10. They have one win, which came at Kentucky Speedway in 2019 when Tyler Ankrum took the No. 17 truck to victory lane.

As previously stated, Deegan doesn’t have a win in the ARCA Menards Series, but she has run near the front on multiple occasions. She runs near the top-10 on a good days, with consistent top-20 finishes. A top-five at some tracks wouldn’t be a surprise either.

The equipment is self is not up to par with the other organizations in the NASCAR Truck Series. However, letting Deegan run in the top-20 to learn more and gain experience is not a bad idea. However she runs, it should be very well known to not set very high expectations for her.

It may be a shocking move for Deegan to already compete full-time in the NASCAR Truck Series. She has not had much success in a watered-down ARCA field this year, while other drivers on the team had more success than her.

She could have a truck capable of making the playoffs, but expectations should not be too high for someone with very limited experience in the series. Many drivers have been rushed series to series with high expectations. It almost always ends in disappointment, with very few outliers.

It could work out, with Deegan surpassing expectations. DGR-Crosley currently fields the No. 15 truck of Tanner Gray, who has run well and currently sits 13th in the standings. If Deegan can replicate Gray’s performance next season, it should be a success for her and the team.