Chesson Hadley moved to the front of the pack with a 5-under-par 66 on Friday, and a double bogey on No. 18 prevented Dustin Johnson from sharing the lead with Hadley at midway point of the Palmetto Championship at Congaree.

Hadley sits at 11-under 131 through two rounds at Congaree Golf Club in Ridgeland, S.C., and Johnson in second at 9 under following a 68. Tain Lee is alone in third at 7 under in his third career PGA Tour start.

Johnson opted to tee off on the last hole with his 3-iron, but the club slipped against his glove during his swing and his shot landed in a native area. He took an unplayable lie, and his next shot sailed over the green, bouncing off the base of the grandstand. He soon two-putted for the double.

Before that mishap, Johnson had carded six birdies and just one bogey. The World No. 1 hails from South Carolina and is trying to nab his first PGA Tour win in his home state, where the tour is staging a one-year replacement event for the canceled Canadian Open.

“I’m pleased with the way I played,” Johnson said. “Obviously, it’s an unfortunate finish, just club slip. It happens. Again, got a little unlucky there not to at least have a swing at it.

“I’m still in a really good position leading into the weekend and still a lot of golf to play, but I feel like I’m playing really well. So got a lot of confidence in what I’m doing.” 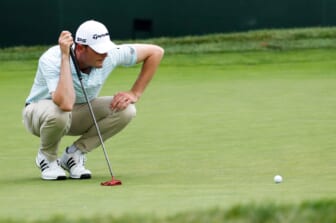 “I didn’t feel like I played great on Monday for the U.S. Open qualifier, but even between now and then, I changed a few things,” Hadley said. “So it’s nice to hit some good shots, and the putter’s hot. So if I can just keep riding the putter, she’s a sweet girl.”

Lee, ranked No. 1,882 in the world, qualified for the tournament on Monday. He played just two other tour events this year, squeaking by to make the cut at the Farmers Insurance Open and the Valero Texas Open but never shooting a sub-70 round.

Lee piled up eight birdies, yet he was more concerned with how close he was to making cut than the leader.

Lee wasn’t the only unheralded golfer to make waves on the first two days. South Africa’s Wilco Nienaber, a 21-year-old making his first PGA Tour start, shot consecutive rounds of 68 to join a six-way tie for fourth at 6 under. A birdie-birdie-eagle stretch in the middle of his round shot him up to 7 under, briefly putting him in solo third.

Nienaber is leading the field in average driving distance at 361.1 yards.

First-round leader Wes Roach followed up his Thursday 64 with a dismal 6-over 77 with zero birdies, plummeting 28 spots down the leaderboard.