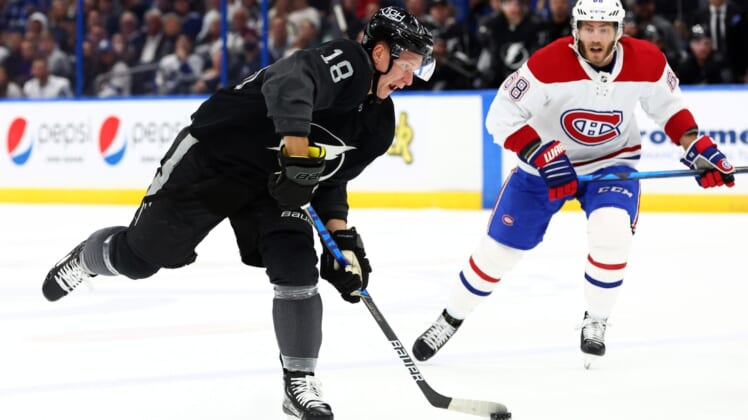 Nick Suzuki scored the shootout’s only goal as the visiting Montreal Canadiens topped the Tampa Bay Lightning 5-4 on Saturday night.

Shooting in the bottom of the third round, Suzuki backhanded the game-deciding tally past Brian Elliott (27 saves) for Montreal’s lone win on its four-game road trip (1-2-1).

The victory came in the Tampa return of Montreal interim coach Martin St. Louis — a Hall of Famer and Lightning legend.

Signed last week by the Canadiens, defenseman Jordan Harris made his NHL debut with 15:55 of ice time.

Kucherov scored a power-play goal and had two assists, and Point added one on the man advantage. Stamkos netted at even strength, and Anthony Cirelli tallied short-handed. Victor Hedman dished two assists.

The Lightning fell to 8-0-2 in the second game of back-to-backs and had their four-game winning streak snapped.

In their third meeting since Tampa Bay beat Montreal to win its second straight Stanley Cup last summer, the Lightning got on the board first just as they did Friday against Chicago — via the stick of Stamkos.

The captain cashed in by camping out at the far post, where he chipped in his 32nd goal off Kucherov’s pass at 8:57.

A turnover by Anderson on Montreal’s second power led to a breakaway headed by Nick Paul, who slipped a pass to Cirelli for his 15th marker at 13:32.

St. Louis challenged the call for goaltender interference, but the goal was upheld.

At 8:57 of the second, Caufield put Montreal on the board with his 15th goal after a defensive breakdown by Tampa Bay resulted in a two-on-zero breakaway.

Less than three minutes later, Kucherov answered with a one-timer — his 12th tally — on his team’s second power play, but Schueneman notched his second at 13:56 to cut it to 3-2.

Stamkos’ turnover led to a breakaway for Anderson, who potted his 17th at 15:50, but Point’s 27th marker gave Tampa Bay a 4-3 lead on the club’s third man advantage.

In the third, Ylonen evened the match for a second time with his second goal at 2:18.