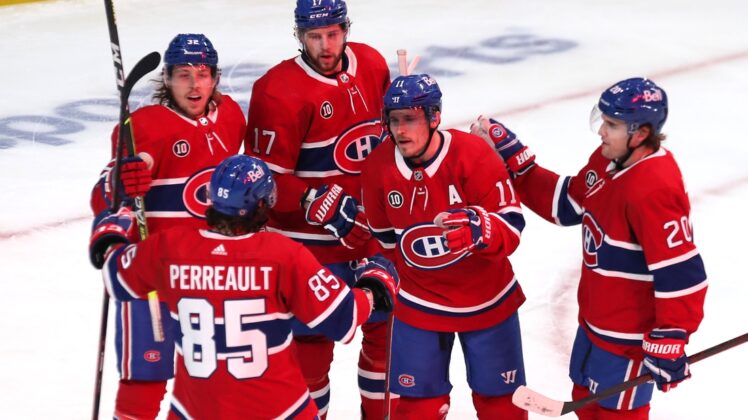 Cole Caufield collected his first career hat trick and Jordan Harris netted his first NHL goal as the host Montreal Canadiens finished their disappointing season with a 10-2 victory over the regular-season champion Florida Panthers on Friday.

Mike Hoffman, Brendan Gallagher, Mathieu Perreault, Jake Evans and Christian Dvorak each had a goal and an assist for the Canadiens (22-49-11, 55 points), who fell to the bottom of the league standings after reaching last season’s Stanley Cup Final.

Montreal’s Tyler Pitlick added a goal, and Carey Price made 37 saves. Only two Montreal skaters didn’t manage a goal or an assist.

Ben Chiarot logged a goal and an assist and Noel Acciari also scored for Florida (58-18-6, 122 points). One night after the Panthers clinched the first Presidents’ Trophy in franchise history, they rested a litany of key players in anticipation of the playoffs.

The Canadiens scored on their first three shots to take a 3-0 lead by the 4:30 mark. Harris, a 2018 third-round draft choice who signed last month after finishing his college career at Northeastern University, started it off with his first NHL goal at 1:57.

Hoffman doubled the lead when he buried a loose puck at 4:18, and Caufield made it a 3-0 game 12 seconds later by ripping a shot from the top of the circle. Gallagher extended the margin at 12:23 of the first with a power-play shot from the right circle.

Chiarot’s power-play goal put the Panthers on the board with 97 seconds remaining in the frame, but Caufield restored Montreal’s four-goal edge 93 seconds into the second period.

Perreault’s one-timer from top of the left circle made it 6-1 at 3:55 of the middle frame, and Evans had a tap-in tally just over two minutes later.

Dvorak scored Montreal’s season-high eighth in a game when he chipped home a rebound with 6:39 remaining in the second period.

Caufield potted his third of the game and 23rd of the season at 8:12 of the third period, and Pitlick made it double digits with his first of the season by 9:51.

Acciari rounded out the scoring with 5:05 remaining.