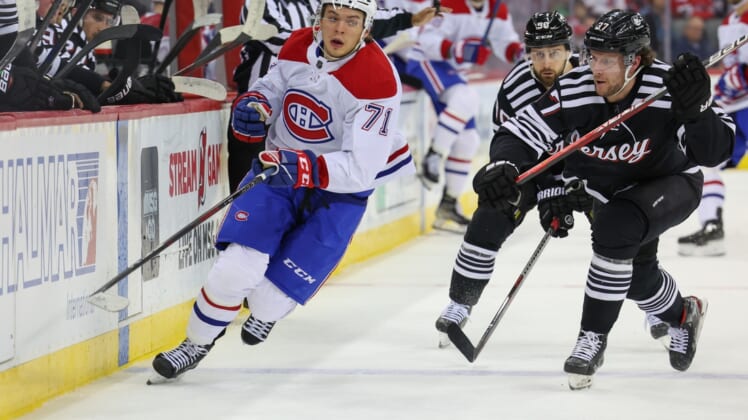 Chris Wideman, Kale Clague and Christian Dvorak each collected one goal and two assists to fuel the Montreal Canadiens to a 7-4 victory over the New Jersey Devils on Thursday in Newark, N.J.

Nick Suzuki and Cole Caufield each scored and set up a goal and Jake Evans and Joel Armia also tallied for the Canadiens (20-40-11, 51 points), who set a season high in goals.

Jake Allen made 33 saves as Montreal posted its first regulation win over New Jersey since a 5-1 victory on Jan. 20, 2017.

Former Canadien Tomas Tatar and Jesper Bratt each recorded a goal and an assist and Ty Smith and A.J. Greer also scored for the Devils (24-41-6, 54 points), who are winless in their past five games (0-4-1). Andrew Hammond yielded six goals on 19 shots before being relieved by Nico Daws, who stopped six of the seven shots he faced.

Suzuki converted Rem Pitlick’s cross-slot saucer pass to open the scoring at 4:35 of the first period. The goal was Suzuki’s team-leading 19th goal of the season.

Evans doubled the advantage by unleashing a blast from above the left circle that sailed past a screened Hammond at 6:41 of the first period. Evans’ goal was his eighth of the season.

Tatar halved the deficit 30 seconds later before Montreal answered at 13:44 after Suzuki’s diagonal pass sprung Caufield on a breakaway. The goal was Caufield’s 17th of the season and 16th in 26 games since Martin St. Louis became the team’s interim head coach on Feb. 9.

Greer’s wraparound goal brought New Jersey back within one at 3-2 with five minutes remaining in the second period. The goal was the second of Greer’s five-season NHL career and first since he scored while playing with the Colorado Avalanche on Feb. 20, 2019.

Armia answered 80 seconds later, and Wideman and Dvorak scored 15 seconds apart early in the third period to stake the Canadiens to a 6-2 lead. Wideman scored from the point and set up Dvorak on a partial breakaway to send Hammond to the showers.

Smith and Bratt each scored to bring New Jersey within 6-4 with nine minutes left, but Clague halted the Devils’ momentum with 6:43 to go by netting his second of the season.