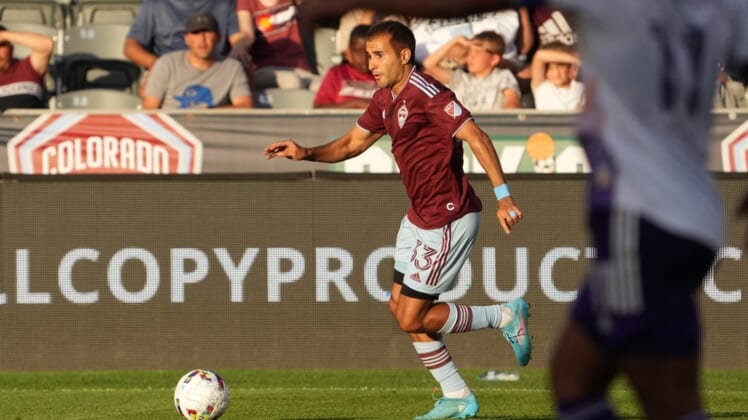 Zardes’ goal came in his 11th appearance and 10th start for the Rapids (5-8-6, 21 points) since arriving in a trade from Columbus in late April.

It was only his third between his two teams this season after he totaled 53 MLS goals in four previous seasons with Columbus.

Colorado has drawn back-to-back games but is winless in six (0-3-3) after the defending Western Conference regular-season champions began the night 12th in the standings.

Orlando City’s Pedro Gallese made six saves, including a few of exceptional variety, as the Lions preserved their fifth draw away from home to go with three wins in 10 road matches.

Orlando remains fifth in the East, tied on points with idle CF Montreal but behind on the first tiebreaker, total wins.

Torres gave Orlando the lead in the 22nd minute on a sequence starting with a long throw-in from the left.

Alexandre Pato took a crucial touch after the initial throw skimmed off a Colorado defender to set up Torres for a thunderous strike off the underside of the crossbar and over the goal line.

Gallese made an exceptional diving stop at his right post to deny Zardes’ header four minutes after halftime.

Zardes, a U.S. national team striker, pulled Colorado level in the 65th minute. Diego Rubio sprayed a long ball wide to Michael Barrios, who collected and then drove in a low cross toward the 6-yard box.

Zardes met it in stride and outmuscled his defender to direct a first-time effort past Gallese from close range.

Colorado had probably the best look at a winning goal on a sequence similar to Orlando’s opener in the 69th minute.

Steven Beitashour took the throw and Barrios provided the flick-on header, but again Gallese made a fabulous reaction stop to deny Rubio.