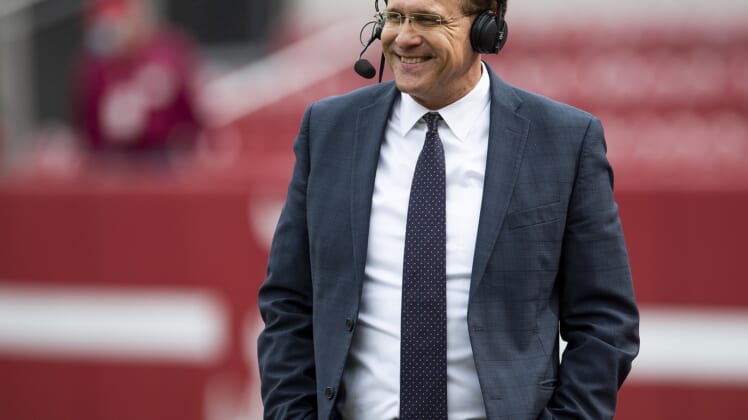 Gus Malzahn is returning to the college football sideline, reportedly agreeing to a multi-year deal to become the UCF Knights’ next head football coach.

Heupel bolted from UCF in January, following in the footsteps of the same AD who hired him for the position. The Knights immediately began their next coaching search, marking the second time in five years they needed to find a replacement head coach.

Scott Frost first took over the program in 2016, turning a 0-12 team into a six-win club. The following year, UCF went 13-0 and capped it off with a Peach Bowl victory over Gus Malzahn’s Auburn Tigers. After the undefeated season, when UCF called itself the national champion, Frost left for Nebraska.

Heupel – previously the quarterbacks coach and co-offensive coordinator for the Oklahoma Sooners (2006-’14) – was hired in 2018. With the program Frost built, he went 22-4 with a 1-1 bowl record in his first two seasons. But things unraveled in 2020. The Knights went just 6-4, often collapsing in close games and their year ended with a defeat in the Boca Raton Bowl.

Needless to say, UCF swung for the fences with its latest coaching search. Malzahn went 68-35 (39-27 in SEC play) at Auburn, winning the SEC and Coach of the Year honors in 2013 after a 12-2 season. During his tenure with the Tigers, Malzahn was one of the few coaches who had any kind of success against Nick Saban.

Auburn has started to slide in recent years. The team went 8-5 in 2018, 9-4 in 2019 and finished with a 6-4 record in a COVID-shortened season this past year. Once ranked as a top-10 team in the preseason rankings, the Tigers slipped out of the top 25 when action wrapped up. Ultimately, Auburn’s boosters chose to pay Malzahn a $21.7 million buyout, replacing him with Boise State’s Bryan Harsin.

Malzahn could prove to be an outstanding hire. He’ll be recruiting in Florida, one of the most talent-rich states for football players. With an electrifying offense, he can also point to players he has sent to the NFL to showcase his track record of success. Most importantly, he’ll be coaching in the American Athletic Conference. Instead of facing programs like Alabama, Georgia and LSU, his team will face Cincinnati, Tulsa and South Florida.

Even if this proves to be a stopping ground for Malzahn, UCF will likely receive a ton of praise for this hire. It upgraded its head coach and with quarterback Dillon Gabriel, this offense will be exciting in 2021.