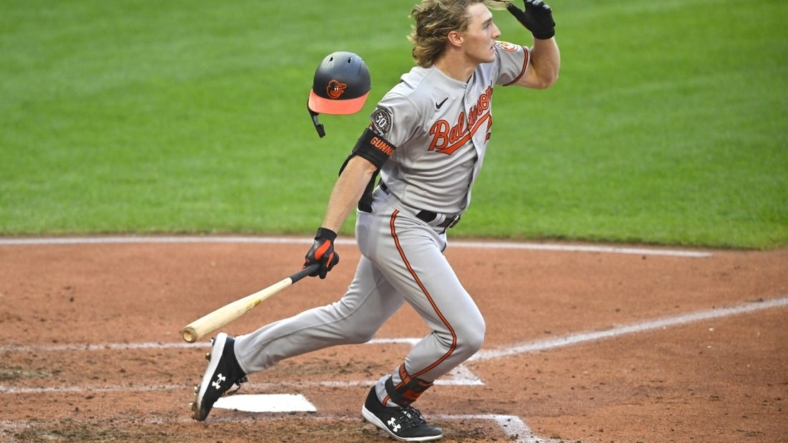 Infielder Gunnar Henderson announced his arrival in a big way with the Baltimore Orioles, who face the host Cleveland Guardians in the rubber match of a three-game series on Thursday.

Making his major league debut on Wednesday, Henderson homered in the fourth inning and added a ninth-inning single in the Orioles’ 4-0 win over the Guardians.

Henderson, who was recalled from Triple-A Norfolk before the game, showed why he is considered Baltimore’s top prospect with his 429-foot home run.

At 21 years and 63 days old, Henderson became the youngest position player to make his Baltimore debut since Manny Machado in 2012. He batted sixth and played third base on Wednesday, and he figures to play multiple infield positions.

Henderson is the youngest player in franchise history to homer in his debut.

“What a cool moment that was,” Orioles manager Brandon Hyde said. “I’m so happy for him and his family. To be able to go deep in your first major league game is really, really special. He played extremely well.”

Cleveland has dropped four of its past six games and was held to five hits in the Wednesday loss.

The Guardians’ bullpen had a stretch of 32 1/3 scoreless innings snapped when Ramon Urias belted a two-run homer in the eighth inning against Eli Morgan on Wednesday.

Cleveland center fielder Myles Straw, who went 7-for-75 (.093) in August, has been losing playing time to rookie Will Benson over the past week.

Benson started the past two games, but manager Terry Francona said that Straw would continue to play a key role.

“It’s been a pretty tough go for him,” Francona said of Straw. “He started to turn a corner and then went right back to where he was. One thing I’ll say, it has never affected his center field play, ever. So that’s why it’s a little hard for me sometimes to maybe not play him. But if we can get him going back to being who he is, that would help us more.”

Baltimore went 17-10 in August, with its starting pitchers leading the charge. Orioles starters have posted a 2.43 ERA in 14 games since Aug. 16.

Right-hander Kyle Bradish (2-5, 5.63 ERA) will look to carry the momentum into his Thursday start. The rookie pitched a career-high eight innings in a 2-0 victory over the Houston Astros on Friday.

“He had a great slider and got a lot of bad swings on it against a really, really good club,” Hyde said. “What an impressive performance, going eight shutout on the road against the Houston Astros — pretty special.”

Bradish, 25, has posted a 3.14 ERA over his past five starts covering 28 2/3 innings. He is set to face Cleveland for the first time in his career.

The Guardians will counter with right-hander Shane Bieber (8-7, 3.02 ERA) in the series finale. He received a no-decision after allowing two runs (one earned) over seven innings against the Seattle Mariners on Friday.

The 2020 AL Cy Young Award winner is 3-0 with a 0.75 ERA in three career starts vs. Baltimore. He fanned 11 while throwing seven innings of two-run ball in a win against the Orioles on June 3.