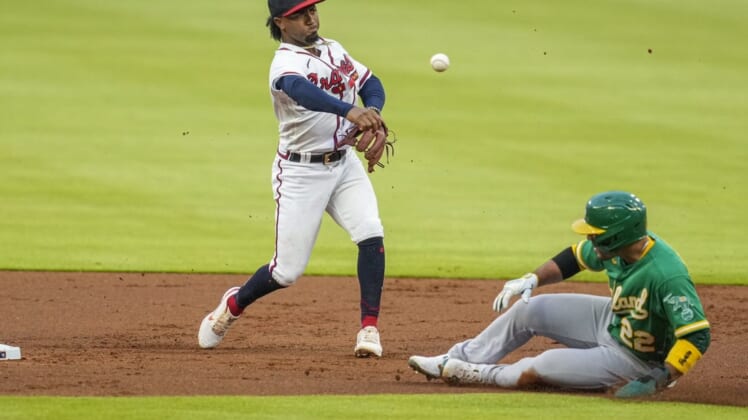 Guillermo Heredia, a late insertion into the starting lineup, hit the go-ahead home run in the seventh inning to help the Atlanta Braves beat the visiting Oakland Athletics 3-2 on Tuesday night and extend their winning streak to six games.

Heredia got the call to play left field when Adam Duvall experienced cramping in his left triceps. He broke a 2-2 tie when he hit the first pitch he saw from reliever Lou Trivino (1-4) for a solo homer, his third.

It was the first long ball Trivino had allowed since April 10, and it sent the A’s to their seventh straight loss.

The Braves also got a pair of long solo home runs from Ronald Acuna Jr. He hit a 435-footer in the bottom of the first and a 464-footer in the third inning, giving him a homer in three consecutive at-bats dating to Sunday’s game. It was the eighth career multi-homer game for Acuna, who now has five homers on the year.

Kenley Jansen pitched a perfect ninth inning, striking out one, to earn his 15th save.

Oakland pitchers struck out 12 Atlanta batters and prevented the Braves from scoring three times with runners in scoring position.

The A’s jumped out to a 2-0 lead on a two-RBI single from Ramon Laureano, which scored Tony Kemp and Elvis Andrus.

Michael Harris II, Atlanta’s rookie center fielder, made the defensive play of the game in the fifth inning when he took a double away from Sean Murphy with a long running catch in the gap in right-center field.

The Braves have won eight straight games against Oakland. Atlanta is 10-4 over its last 14 games.