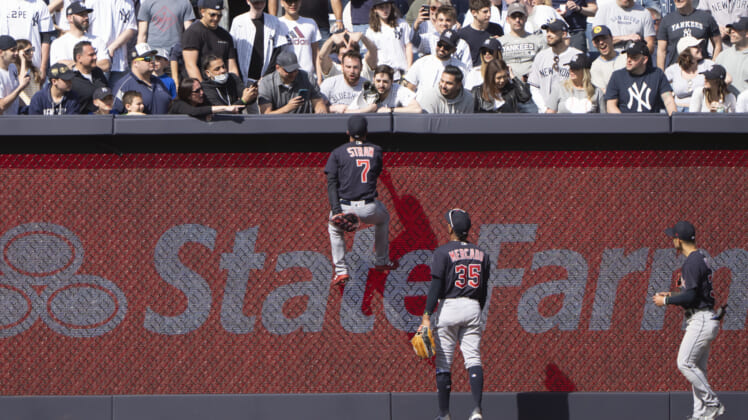 Here’s something you don’t see every day. We’ve all heard of Malice at the Palace when Ron Artest went ham on some spectators in the stands, but near the end of the Cleveland Guardians’ baseball game against the New York Yankees, we nearly had another player-fan altercation, this time courtesy of Myles Straw.

In the ninth inning with the game tied at four apiece, the outfield of the Guardians began interacting with the baseball fans in attendance at Yankee Stadium. It even led to Straw hopping up on the fence for a few choice words toward the hostile spectators.

Gleyber Torres came through with a single to right-center field in a pinch-hit situation to drive home the go-ahead run, giving the Yankees the walk-off win in the bottom of the ninth inning.

As anticipated, this prompted fans to erupt with excitement, one could say. Their actions afterward could not be commended, but throwing debris onto the playing field, which can be seen in the clip below.

Look, fans being disrespectful irritants is nothing new. Of course people should remain respectful, but we’ve seen time and time again, that’s not something some human beings are capable of. When the competitive battle isn’t going their way, sometimes heads get hot, which leads to strange occurrences such as this.

In the end, they’re all rooting for the same thing, for their team to win the game, but being a bad fan is never a good look. And players should know better than to go back after the onlookers, just focus on the task at hand. The moment you show you’re vulnerable to this type of heckling, fans are only going to go harder. It’s a lose-lose situation, hopefully everyone involved will learn from their latest involvement.