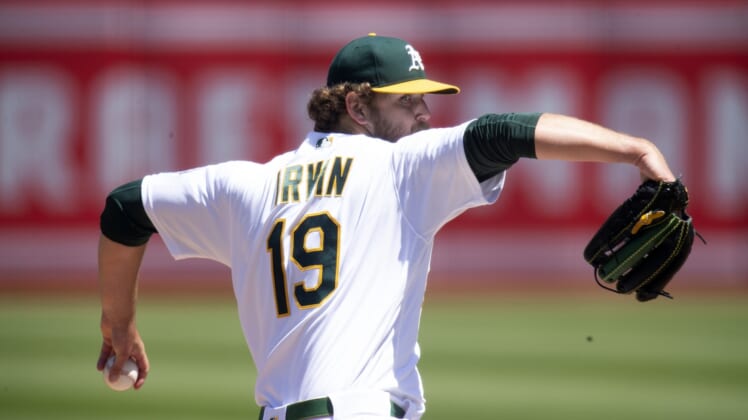 Pinch hitter Richie Palacios delivered a tie-breaking, two-run double in the top of the ninth inning as the visiting Cleveland Guardians beat the Oakland Athletics 3-1 on Saturday afternoon.

Palacios was called upon to face Dany Jimenez (1-1) with two on and two out. He turned on Jimenez’s 3-1 offering and hit it over Cristian Pache’s reach in deep center field, allowing two runs to score easily.

Both runs against Jimenez were unearned after second baseman Nick Allen’s error on a potential double-play ball that could have ended the inning.

Nick Sandlin (1-1) pitched a scoreless eighth inning for the victory, and Emmanuel Clase worked around a two-out double in the ninth for his fourth save. Cleveland has won two straight following a seven-game losing streak.

Oakland starter Cole Irvin allowed one run on six hits over six innings. He walked two and struck out four while throwing 90 pitches. Irvin has given up a total of two runs over his last three starts covering 16 innings.

Shane Bieber started for Cleveland and pitched seven innings, allowing one run on seven hits with one walk and seven strikeouts.

The Guardians pushed a run across in the fourth inning when Oscar Mercado doubled with one out and scored on Andres Gimenez’s single to center field.

Oakland answered in the fifth on Sheldon Neuse’s two-out blast over the center-field wall. The 404-foot homer was Neuse’s second of the season.

Both teams had multiple scoring opportunities in the third inning but came up empty. Cleveland loaded the bases with two outs in the top half before Irvin got both Jose Ramirez and Owen Miller to fly out.

Oakland loaded the bases in the bottom half when Neuse drew a two-out walk. Bieber then struck out Billy McKinney and retired Seth Brown on a groundout to end the inning.

Allen and Kevin Smith had two hits apiece for Oakland, which went 0-for-8 with runners in scoring position.

Guardians outfielder Steven Kwan returned to the lineup after a five-game absence due to right hamstring tightness. Kwan went 2-for-4 while hitting second.