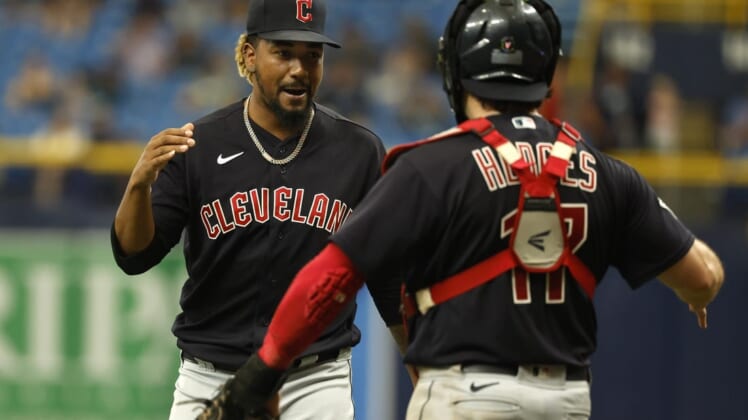 After closing out a 10-day, 11-game road trip with a 6-5 mark, the Cleveland Guardians return home to Progressive Field to begin a three-game series against the Arizona Diamondbacks on Monday.

The Guardians wrapped up their trip against the Chicago White Sox, Boston Red Sox and Tampa Bay Rays by taking two of three from Tampa Bay over the weekend.

Cleveland will need to be careful not to overlook Arizona, which sits last in the National League West but has won six of its last 10 games.

The resourceful Guardians beat Tampa Bay 5-3 on Sunday despite not recording a single extra-base hit. Austin Hedges’ tiebreaking two-run single in the fifth inning proved to be the difference.

“I think that’s just our brand of baseball,” Cleveland outfielder Steven Kwan said. “Just kind of grinding at-bats out, getting the next guy up, passing the torch. That’s just kind of our brand, and if we can keep that going, we’ll be successful.”

Arizona, which is making its first trip to Progressive Field since 2014, will send right-hander Zach Davies (2-4, 3.94 ERA) to the mound in the series opener.

Davies, 29, landed on the injured list due to right shoulder inflammation following his start against the Detroit Tigers on June 25.

Davies had been impressive over his five starts prior to the injury, posting a 2.56 ERA with a 25-to-7 strikeout-to-walk ratio in 31 2/3 innings.

He is making his second career appearance against Cleveland after limiting them to one run over 5 1/3 innings on May 12, 2021.

Naylor will have tests on Monday to examine the extent of his right ankle soreness, while Miller was scratched from Sunday’s contest due to right arm soreness.

Arizona traded veteran outfielder David Peralta to Tampa Bay on Saturday for 19-year-old catcher Christian Cerda, and more moves could be coming ahead of Tuesday’s deadline.

Davies is reportedly on the trading block, along with relievers Ian Kennedy and Joe Mantiply.

“If there are trades out there that organizationally tip us over in certain ways, from a depth standpoint, from a long-term, upside standpoint, we’ll look at it,” Arizona general manager Mike Hazen said.

Rookie Jake McCarthy is expected to receive the bulk of the playing time in left field in place of Peralta, who spent the first nine seasons of his career with Arizona.

“McCarthy’s a very good baseball player, and we’re just scratching the surface with him,” D-backs manager Torey Lovullo said. “That’s our mindset. We’ve got to keep coaching these young players and see where they land. He’s in a good spot.”