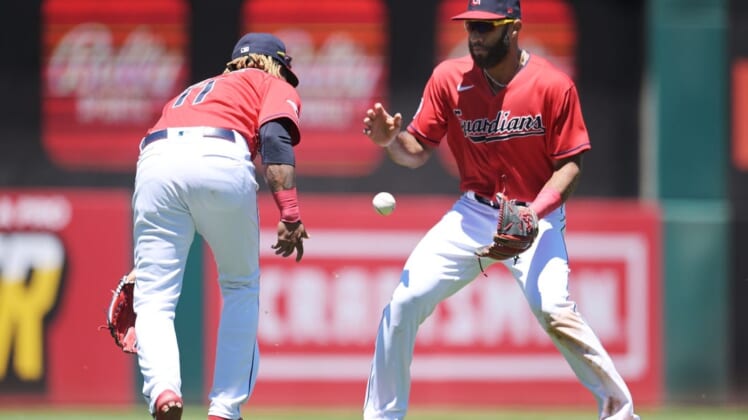 Amed Rosario’s two-run single in the eighth inning was the difference Tuesday as the host Cleveland Guardians snapped a five-game losing streak with a 3-2 victory over the Minnesota Twins in the opening game of a doubleheader.

Rosario’s clutch hit drove in Myles Straw and Steven Kwan, both of whom had walked off Twins reliever Emilio Pagan (1-3). Both runners had moved into scoring position on a wild pitch. Rosario finished 3-for-4, with one run and two RBIs.

Guardians reliever Sam Hentges (2-0) failed to hold the lead in the eighth inning but earned the victory anyway. The left-hander allowed a leadoff home run to Carlos Correa, which snapped a 1-1 tie. Correa’s ninth of the season gave him a home run in each of the first two games of the series.

Twins starter Devin Smeltzer had a career-high nine strikeouts in his six innings. The left-hander allowed four hits, one run and no walks. In three starts against the Guardians this season, Smeltzer has given up just two runs in 17 innings.

Cleveland turned it over to reliever Eli Morgan for the seventh inning and he failed to hold a 1-0 lead. After two quick outs, Morgan allowed a double to Jose Miranda and a triple off the wall in center to Gilberto Celestino to knot the score 1-1.

The Guardians took their 1-0 lead in the first inning. With Rosario on first base and two outs, Franmil Reyes’ popup into short right field dropped in front of Max Kepler for an RBI double as Rosario circled the bases.