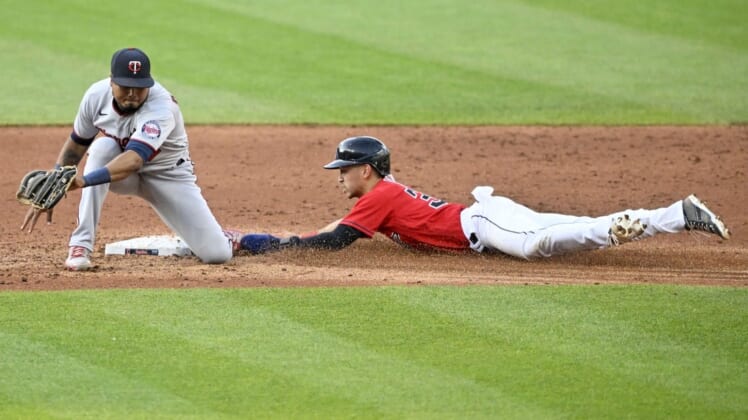 Josh Naylor belted a two-run homer with two outs in the 10th inning, capping a four-run rally that powered the Cleveland Guardians to a stunning 7-6 victory over the visiting Minnesota Twins on Wednesday.

The Twins scored three in the top of the 10th, then got the first out in the bottom of the 10th with the automatic runner at second base. A walk to Steven Kwan (3-for-4) and a wild pitch put runners at the corners for Amed Rosario, who hit an RBI double to cap a 4-for-4 night.

Jharel Cotton (2-2) replaced Emilio Pagan on the mound, and he retired Jose Ramirez on a lineout. Kwan then scored on a passed ball to bring the Guardians within one run.

Naylor then hit an opposite-field blast to the bleachers in left field for his ninth homer of the season. It traveled an estimated 358 feet.

Guardians reliever Eli Morgan (4-2) allowed three runs in the top of the 10th yet earned the win. He allowed a one-out, run-scoring single to pinch hitter Carlos Correa and a two-out, two-run homer to Max Kepler. The long ball was Kepler’s eighth of the season and the 14th of his career in Cleveland.

It was the second time in the past eight days that the Guardians scored four runs in the last inning to shock the first-place Twins. They beat Minnesota 11-10 on June 22 in Minneapolis.

Cleveland starter Cal Quantrill pitched a career-high eight innings but left with a no-decision. The right-hander surrendered eight hits, three runs and no walks. He struck out three batters.

The Guardians led 3-0 before the Twins pulled even in the sixth. With two outs, Gary Sanchez hit a ball off the center-field wall that came about two feet from being a home run. He settled for a double but quickly scored on Alex Kirilloff’s first home run of the season, a 403-foot blast to left.

Ex-Guardians third baseman Gio Urshela followed with his seventh homer of the season, a 379-foot shot down the left field line. It tied the score at 3-3.

The Twins have hit 10 homers against the Guardians in the first four games of the five-game series, compared to one by Cleveland batters. Each team has won twice.

Kiriloff finished 3-for-4, and Kepler and Urshela each had two hits for Minnesota.