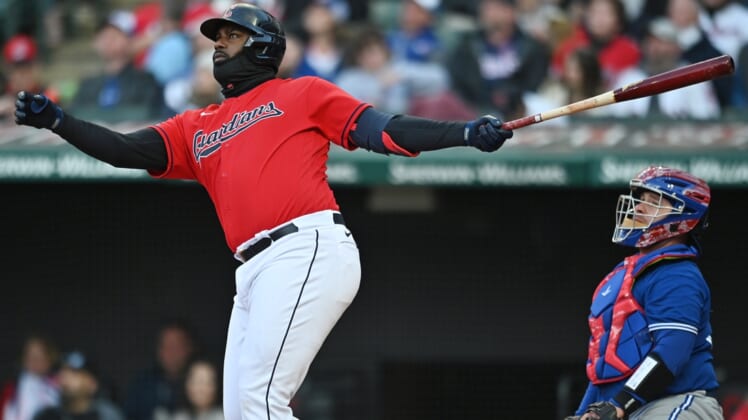 Franmil Reyes continued his hot hitting with a home run to support a strong outing by winning pitcher Triston McKenzie in the Cleveland Guardians’ 8-2 victory over the visiting Toronto Blue Jays in Game 2 of a doubleheader on Saturday.

The Blue Jays won the first game of the doubleheader, 8-3.

Cleveland has won six of its last eight games.

McKenzie (2-2) allowed hits to the each of the first three batters of the game and then settled in. He retired the final 11 hitters he faced.

The Blue Jays had visions of a sweep when their first three batters reached safely. George Springer singled and came home on a double by Bo Bichette. Vladimir Guerrero then singled to center, moving Bichette to third.

Things could have been a lot worse if not for some good defense by the Guardians. Catcher Luke Maile picked off Guerrero at first base for the first out.

Second baseman Andres Gimenez ended the inning when he stabbed a one-hop liner from Lourdes Gurriel Jr. and threw him out at first from his knees.

The Guardians jumped on Toronto starter Ross Stripling (0-1) for three runs in the first. Amed Rosario singled and went to third on a double over the head of Teoscar Hernandez in right field by Jose Ramirez. Both runners scored on a double by Owen Miller and he came home on Gimenez’s two-out single.

Toronto got one back in the second when Matt Chapman led off with a walk, moved to second on a wild pitch, advanced to third on a groundout by Alejandro Kirk, then scored on an RBI double by Santiago Espinal — who was out at third trying to stretch it into a triple.

Cleveland extended its lead to 4-2 in the third when Reyes turned on a Striping fastball and drove it over the wall in left field. It was his third home run of the season and it traveled an estimated 391 feet.

After Toronto went to the bullpen, reliever David Phelps walked Rosario and Miller in the fifth. Reyes, working himself out of an early-season hitting slump, followed with a run-scoring single for a 5-2 advantage.

Oscar Mercado walked to lead off the sixth and came home on a double by Maile into the left-field corner, as the Guardians stretched their lead to 6-2. Maile was sacrificed to third and scored on Steven Kwan’s single up the middle.

A sacrifice fly by Mercado drove in Miller with the Guardians’ eighth run in the seventh inning.