Guardians’ offense hopes to back Zach Plesac vs. Tigers 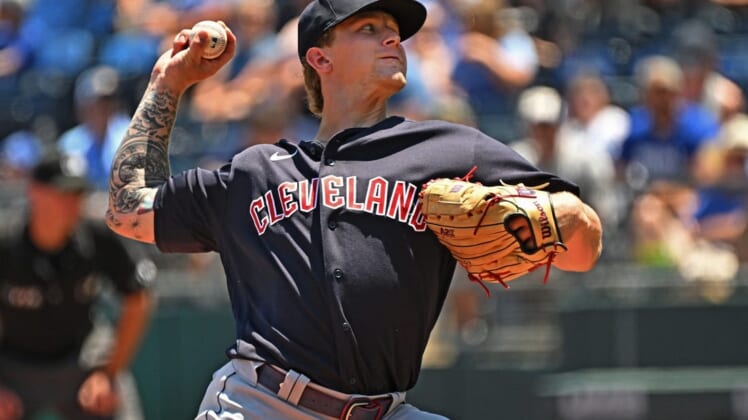 Right-hander Zach Plesac has been a hard-luck pitcher for the Cleveland Guardians this season, going 2-7 with a 3.99 ERA.

In his last five starts, Cleveland has scored seven runs. Plesac will hope for better offensive support on Friday night when he starts the second game of the four-game series against the visiting Detroit Tigers.

The Guardians won the first game 4-0 behind Triston McKenzie’s gem on Thursday. McKenzie struck out a career-high 12 in eight scoreless innings, and Emmanuel Clase threw a perfect ninth to complete a five-hit shutout.

The Tigers have lost two games in a row and six of seven. The Guardians had dropped three of five prior to the Thursday win.

Plesac is 4-2 with a 2.05 ERA in eight career starts against the Tigers. He lost to Detroit on July 4 despite giving up just two runs on six hits in six innings.

Hutchison beat the Guardians on July 5, when he yielded two runs (one earned) on five hits in five innings.

The Guardians pounded out 10 hits on Thursday, including solo home runs by Josh Naylor and Andres Gimenez. Of Naylor’s 12 home runs, six have put Cleveland into a lead and three have tied the game.

Cleveland’s Amed Rosario went 3-for-5, while Gimenez and Austin Hedges each added two hits. Gimenez hit his 10th home run in the bottom of the eighth.

McKenzie won’t be going to the All-Star Game, but he pitched as he belonged there on Thursday.

“We scratched out five hits,” Tigers manager A.J. Hinch said. “He missed a lot of bats. Obviously we didn’t score or get a ton of hits. Not a great night for us.”

Guardians manager Terry Francona didn’t entertain thoughts of allowing McKenzie to come out for the ninth. The 24-year-old pitcher had already thrown a career-high 109 pitches through eight innings.

“I’m just happy to go out there and put zeros on the board,” McKenzie said.

He received a gift before the game when he looked up in the stands and saw his mother.

“Maybe I’ll have to have her come to more games,” he said.

It was McKenzie’s fourth career game with 10 or more strikeouts, and three of them have come against the Tigers.

Designated hitter Miguel Cabrera had two of Detroit’s five hits against McKenzie. He raised his batting average to .290 on the season while breaking out of a 1-for-23 slump.

The four-time batting champion has tortured Cleveland throughout his career, hitting .315 with 50 home runs and 175 RBIs in 237 career games.

Cabrera, 39, is heading to the All-Star Game next week for his 12th appearance, his eighth with the Tigers. He and St. Louis Cardinals slugger Albert Pujols, 42, were added to the All-Star rosters last week by commissioner Rob Manfred.