Guardians look to cut down on miscues in facing White Sox 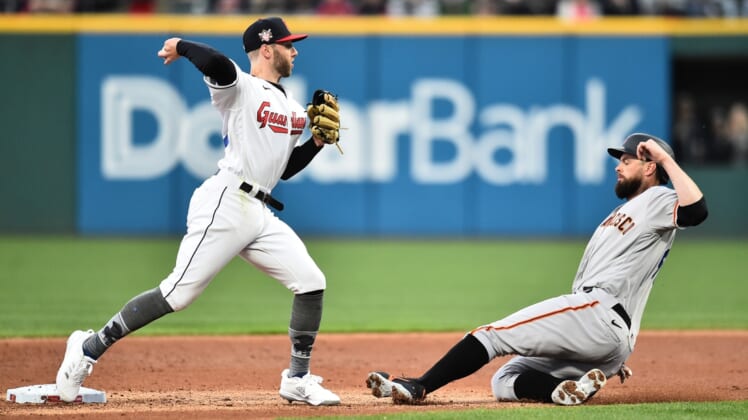 For every mistake the Cleveland Guardians made in their weekend series against San Francisco, the Giants made them pay.

With the American League Central-leading Chicago White Sox coming to town for a four-game series starting Monday, the Guardians could be facing more of the same.

“Good teams do that,” Cleveland manager Terry Francona said of teams capitalizing on opportunities. “We have to find a way to be better defensively. We made some mistakes, and it cost us.”

Much like the Giants, who swept the Guardians in the three-game series that concluded Sunday, the veteran-laden White Sox are likely take advantage of any miscue, mental as well as physical.

In San Francisco’s 8-1 bludgeoning of the Guardians on Sunday, Cleveland failed to turn a double play in the fourth inning.

The trouble started earlier in the frame when, with one on and one out, Brandon Crawford’s grounder to first baseman Bobby Bradley got caught in the webbing of his glove, which was ruled a single.

That seemed to open the floodgates. After a walk loaded the bases, Thairo Estrada’s fielder’s choice grounder should have been turned for a double play, but second baseman Owen Miller’s throw to first skipped under Bradley’s glove for a throwing error, which allowed two runs to score.

In Saturday’s 4-2 loss to the Giants, Miller, playing first base, didn’t get to the bag in time on a potential double-play grounder. A run scored and no physical error was charged, yet it was a mental miscue.

Francona didn’t want to jump all over his second-year infielder, but he did say he spoke to him about the play. Miller has been splitting time between first and second base.

“We don’t want to beat him over the head,” the manager said. “We’re moving him around. Those are things that are going to happen from time to time.

“Hopefully, it’s not going to happen every night. With youth, there’s going to be some growing pains.”

Unless the Guardians’ defense improves, it’s going to ruin some decent pitching performances.

Although they weren’t able to sweep the Tampa Bay Rays and lost 9-3 in Chicago on Sunday, the defending Central Division champion White Sox have opened a two-game lead over the second-place Guardians.

White Sox first baseman Jose Abreu, who is in his ninth season, all with the Chicago, ranks among the club’s all-time leaders in home runs (third with 229), slugging percentage and extra-base hits. He hit a two-run homer Saturday against Tampa Bay.

Abreu is one of three players in Sox history to record five or more 30-homer/100-RBI seasons, joining Hall of Famer Frank Thomas (eight) and Paul Konerko (five). His 304 RBIs since the start of the 2019 season lead the major leagues, 26 more than Boston’s Rafael Devers in that span.

Pitching has been the key to Chicago’s fast start, even though Lance Lynn, Lucas Giolito and Joe Kelly have been injured. Kelly is close to returning.

“He will add quality and depth to our bullpen,” White Sox manager Tony La Russa said. “If you want to have a good year, you need a deep bullpen.”

The Guardians series will mark the start of a seven-game road trip for Chicago.