Guardians hold Orioles to one hit in series-opening win 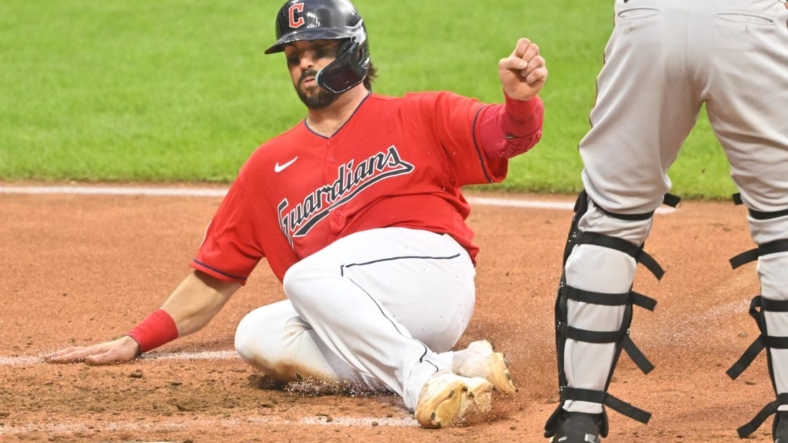 Josh Naylor homered, Steven Kwan doubled in two runs, and four Cleveland pitchers combined on a one-hitter as the Guardians opened a three-game series against the visiting Baltimore Orioles with a 5-1 victory on Tuesday.

Cal Quantrill (11-5) won his seventh straight decision, allowing one run on one hit — a leadoff single in the second inning to Ramon Urias — over six innings. He struck out four with three walks.

Trevor Stephan, James Karinchak and Emmanuel Clase did not allow a hit over the final three scoreless innings for Cleveland, which bounced back after losing three of four to the Seattle Mariners over the weekend.

The Guardians bullpen has not allowed an earned run over its last 30 1/3 innings dating back to Aug. 15.

Naylor followed with a two-run homer to center. The 399-foot blast was Naylor’s 16th this season and first since Aug. 12.

Cleveland extended its lead to 5-1 with two runs in the fifth. The Orioles loaded the bases with three straight singles before Kwan delivered a two-run double to left field.

After Will Benson scored on Amed Rosario’s sacrifice fly, Nick Vespi relieved Watkins and got Ramirez to ground out to end the inning.

Watkins allowed five runs on six hits over 4 2/3 innings. He struck out three with no walks.

The Guardians threatened to pull away in the sixth, when they loaded the bases with one out. Baltimore escaped the jam unscathed after Austin Hedges and Benson each flied out against Rico Garcia.

Cleveland pitchers retired 12 batters in a row before Mountcastle drew a two-out walk in the seventh. Rougned Odor then grounded out to end the inning.

Andres Gimenez had two hits for the Guardians, who have won seven straight meetings against the Orioles at Progressive Field.