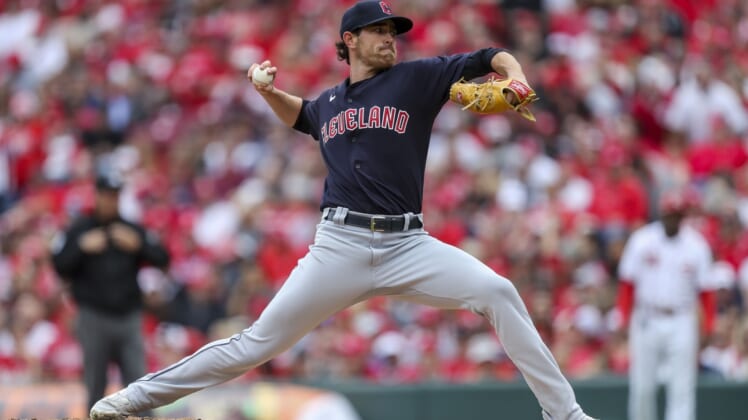 Cleveland Guardians ace Shane Bieber teased fans with a possible no-hitter, but it was an improbable two-run homer by Andres Gimenez in the ninth inning that was the difference in a 10-5 victory over host Cincinnati Tuesday in the Reds’ 146th home opener.

Gimenez, who batted .218 last season for Cleveland, blasted a home run off reliever Hunter Strickland (0-1) in the ninth inning to break a 4-4 tie.

Guardians third baseman Jose Ramirez later followed with his third career grand slam to turn the game into a rout.

Bieber outdueled the Reds’ Tyler Mahle, but was knocked out in the sixth inning of Game 1 of the two-game Ohio Cup series.

Bieber, the 2020 Cy Young Award winner, had a no-hitter through 5 1/3 innings before leaving with a no-decision. He allowed three runs, two hits, two walks and struck out five. Bieber has never lost to Cincinnati and is 3-0 lifetime in four career starts.

Bieber was sidelined last year from June 14 to Sept. 23 with a strained shoulder. He still earned his second All-Star berth.

Reds designated hitter Jake Fraley broke up the no-hitter with a one-out double in the sixth inning. Jonathan India followed with a two-run double that drove in Fraley and Kyle Farmer to cut the Reds’ deficit to 4-2 and send Bieber to the showers.

Mahle exited after the fourth inning and allowed four hits and four runs (one earned). He struck out four with two walks.

The Guardians took a 3-0 lead in the third inning, two on Jose Ramirez’s two-out triple. Myles Straw and Gimenez scored on the bloop hit in which Reds outfielders Tommy Pham and Nick Senzel collided.

Cleveland didn’t stop there. Gimenez’s two-out triple in the fourth knocked in Owen Miller, who had doubled, for a 4-0 advantage.

The Guardians have scored 37 runs in their last three games, all victories.