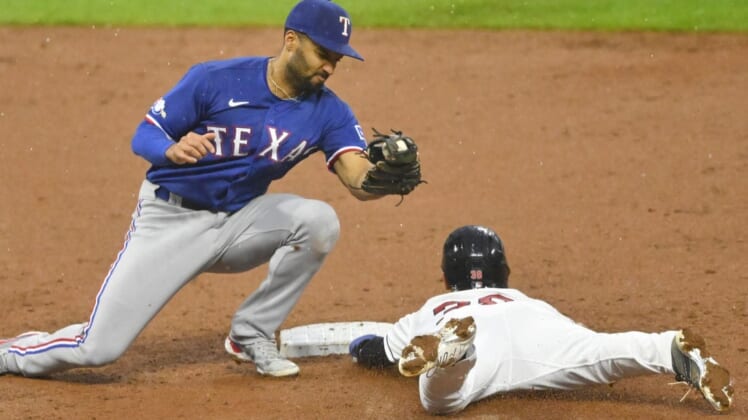 Eli Morgan earned the victory with 1 2/3 innings of hitless relief as the host Cleveland Guardians blanked the Texas Rangers 4-0 on Wednesday.

The Guardians won two of three games against the Rangers, giving them seven victories in the past nine games as they reached the .500 mark (26-26).

Morgan (2-1) struck out two and walked none after a 2-hour, 7-minute rain delay.

Cleveland ace Shane Bieber was cruising on the mound when the rains came. He was two outs shy of qualifying for his fourth victory, but officials ordered the tarp put on the infield with one out in the fifth.

Bieber allowed three hits, no runs and no walks. He struck out six and wasn’t happy when the game was stopped.

When action resumed, Morgan replaced Bieber, and before he threw a pitch, he picked Adolis Garcia off second base.

The Guardians struck first in the second inning off Dane Dunning (1-4). Josh Naylor singled, moved to second on a groundout and scored on Andres Jimenez’s double. Austin Hedges followed two batters later with a run-scoring single for a 2-0 advantage.

Five consecutive hits resulted in two more runs for Cleveland in the third. Jose Ramirez collected his AL-leading 54th RBI when his double scored Myles Straw. On the play, Amed Rosario was thrown out at the plate by Texas second baseman Marcus Semien, who took a strong relay throw from right fielder Garcia.

Naylor followed with a single to drive in Ramirez for a 4-0 lead.

Gimenez went 2-for-4 with two doubles to raise his average to .310.

Dunning, winless in his past seven starts, pitched four innings and allowed nine hits, four runs and no walks. He struck out one.

Semien, who was 7-for-8 with three home runs in the doubleheader on Tuesday, went 1-for-4 on Wednesday.

The Rangers’ streak of having a home run in 11 consecutive games was stopped by Cleveland pitching.

Guardians closer Emmanuel Clase pitched around a ninth-inning single in a non-save situation.