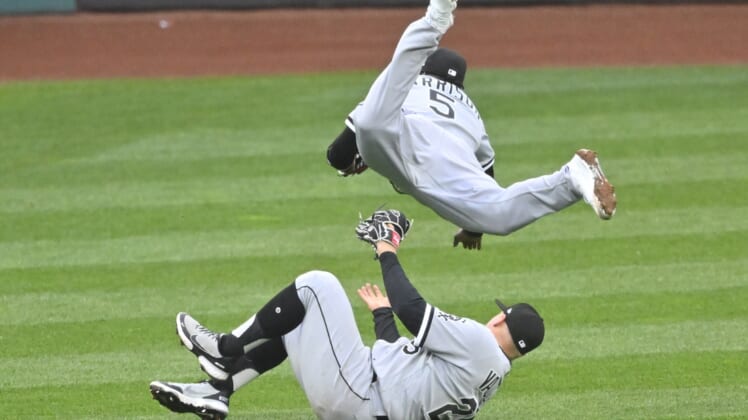 The Cleveland Guardians hung on for a 2-1 victory in the nightcap of a doubleheader sweep over the visiting Chicago White Sox on Wednesday.

The Guardians didn’t waste any time jumping on Chicago in the first inning of the second game.

Back-to-back doubles by Steven Kwan and Jose Ramirez handed Cleveland a 1-0 lead. Ramirez’s major-league leading 20th RBI of the season came on an 0-2 count. It was the 250th double of his career.

Gabriel Arias, called up for the day from Triple-A Columbus, got his first major league hit in the fourth inning. He moved to second on a wild pitch and scored on Oscar Mercado’s double off the left-field wall for a 2-0 advantage.

Cleveland starter Triston McKenzie lost his no-hitter and shutout on the same play. After walking the first two batters in the fifth, Danny Mendick doubled down the left-field line to drive in Reese McGuire. However, Kwan made a one-hop throw to catcher Bryan Lavastida, who tagged out Adam Engel.

Reliever Anthony Gose got out of the inning with Cleveland clinging to a 2-1 lead. Gose (1-0) earned the victory with 1 2/3 innings of hitless relief. He fanned all four batters he faced.

McKenzie, who struck out a franchise-record eight consecutive White Sox hitters on May 31, 2021, allowed one run on one hit in 4 1/3 innings. He struck out four and walked four.

Closer Emmanuel Clase earned his first save of the season with a scoreless ninth.

Chicago third baseman Josh Harrison made a spectacular defensive play in the fifth inning. He made an over-the-shoulder catch while running with his back to the plate. After catching the ball, he had to leap over a sliding Andrew Vaughn to retire Ramirez.

An inning later while making a pitching change, White Sox manager Tony La Russa removed Harrison from the game with right shoulder soreness and replaced him with Jake Burger.