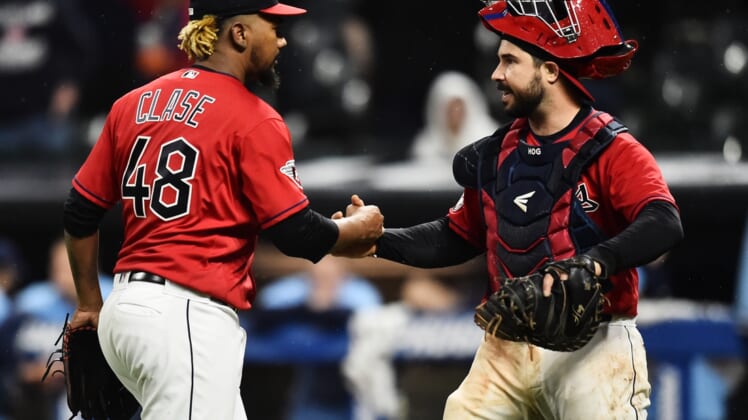 The Cleveland Guardians rode a three-run fifth inning and a solid performance from starter Aaron Civale to nip the visiting Toronto Blue Jays 6-5 on Thursday.

Civale (1-2) pitched 5 2/3 innings and allowed four earned runs, six hits and no walks. Civale struck out a season-high eight batters in the opener of a four-game set.

Cleveland closer Emmanuel Clase earned his fifth save with a perfect ninth.

Civale got off to a shaky start, as the Guardians trailed 2-0 six pitches into the game. Bo Bichette singled with one out and Vladimir Guerrero Jr. sent a fastball over the left-field wall for a two-run home run. He now has seven home runs and 19 RBIs.

The Guardians knotted the score at 2-2 in the third inning. Rookie Steven Kwan, the reigning AL Rookie of the Month, blasted his first major league home run with Austin Hedges aboard.

Cleveland forged ahead 3-2 in the fourth. Franmil Reyes singled and moved to third on a hit-and-run single by Andres Gimenez. Reyes came home on a fielder’s choice by Amed Rosario.

The Guardians jumped on starter Jose Berrios (2-1) for three more runs in the fifth.

Hot-hitting Josh Naylor drove in Myles Straw with a two-out single down the left-field line. Reyes followed with a single to center to knock in Kwan and send Berrios to the showers. Reyes went 3-for-4 on the night and has five hits in his last two games.

Gimenez greeted reliever Casey Lawrence with a run-scoring double to drive in Naylor, making it 6-2.

The Blue Jays fought back with two runs in the sixth. Civale yielded a single to Bichette and hit Guerrero, and it came back to haunt him. With two outs, Zack Collins doubled to right field to make it 6-4.

The Blue Jays closed to within 6-5 in the seventh off reliever Nick Sandlin, as Alejandro Kirk led off the inning with his first home run of the season, a towering drive into the left-field bleachers.