Guardians’ bats back Cal Quantrill in win over Royals 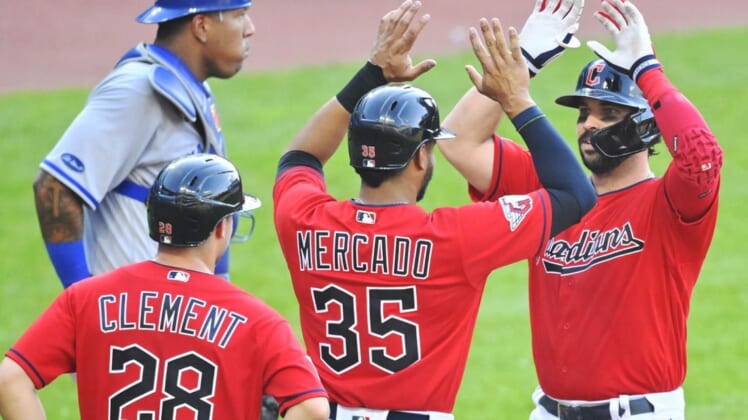 Veteran right-hander Cal Quantrill picked up his first victory in more than a month and catcher Austin Hedges blasted a three-run home run to spark the Cleveland Guardians’ 8-3 win over the visiting Kansas City Royals on Tuesday.

Quantrill (2-3) won his first game since his first start of the season on April 10 in Kansas City. He pitched 6 1/3 innings and allowed six hits, three runs and no walks. He struck out five batters in his 97-pitch performance (66 strikes). He’s now 5-0 in his career against the Royals.

The Guardians jumped on losing pitcher Daniel Lynch (2-4) in the first inning with three runs on four hits. Owen Miller’s fielder’s choice drove in Amed Rosario, who had tripled. Ernie Clement and Andres Gimenez followed with run-scoring singles with two outs for a 3-0 lead.

Kansas City, however, kept chipping away. In the second, Hunter Dozier doubled and scored on Kyle Isbel’s single to leave the score 3-1.

The Royals scored again in the third when Nicky Lopez doubled and came home on Andrew Benintendi’s single, cutting the Guardians’ lead to 3-2. MJ Melendez followed with single to right field. Rookie Oscar Gonzalez fielded the ball and fired a strike to catcher Hedges, who tagged Benintendi for the third out.

Cleveland broke things open in the bottom of the third when Clement singled and Oscar Mercado walked. Hedges followed with a three-run homer that barely cleared the left-field wall. His fourth home run on the season traveled an estimated 344 feet. The long ball snapped Hedges’ 0-for-13 skid and extended the Guardians’ lead to 6-2.

After a bunt single by Gimenez to lead off the fifth, Royals manager Mike Matheny had seen enough of his pitcher. Lynch went four-plus innings and allowed nine hits, six runs and three walks. He fanned two batters.

With two runners aboard following a Kansas City fielding error, Gonzalez doubled them home in the sixth to give Cleveland a six-run lead.

Kansas City rallied for a single run in the seventh when Dozier was hit by a pitch and scored on Whit Merrifield’s double off the left-field wall, which left the score 8-3.