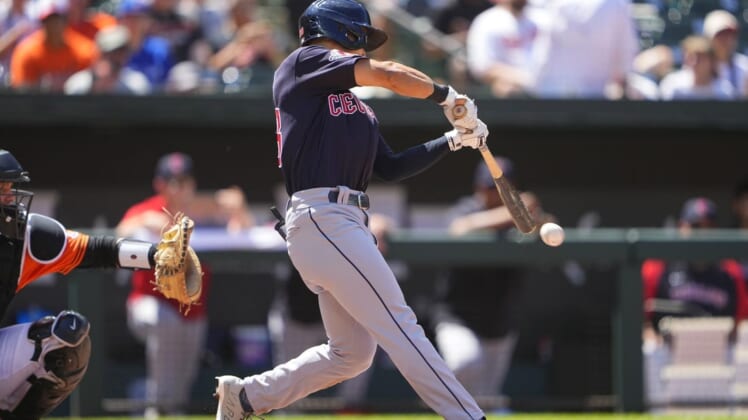 Andres Gimenez belted a three-run home run in the first inning and four Cleveland Guardians pitchers combined on a four-hitter in Sunday afternoon’s 3-2 victory against the host Baltimore Orioles.

The Guardians won for the fifth time in their last six games.

The Orioles scored their runs in the fourth inning on Ryan Mountcastle’s two-run home run. Ryan McKenna had half of Baltimore’s hits with a single and a double as Baltimore has now gone almost two weeks without consecutive victories.

Cleveland starter Zach Plesac (2-4) worked six innings, allowing four hits. He struck out eight and didn’t issue a walk to earn his first win in his last seven starts. Emmanuel Clase worked the ninth for his ninth save.

The Orioles used Dean Kremer, who was in his first game in the majors this season, in a starting role. He gave up three runs on five hits and a walk in 4 1/3 innings. Kremer was reinstated from the injured list in order to be eligible for this game after three outings for Triple-A Norfolk.

Gimenez’s seventh homer of the season came with two outs. Amed Rosario reached on a single and Owen Miller walked to allow Gimenez to come to the plate.

Gimenez has homered in back-to-back games and three times in less than a week.

Mountcastle’s homer to right-center field came with one out in the fourth. The inning began when Trey Mancini was hit by a pitch.

The Orioles wasted a scoring chance in the fifth when Rougned Odor singled and McKenna doubled to begin the frame. But Plesac struck out Jorge Mateo and Austin Hays before Mancini lined out to end the threat.

Baltimore had a chance in the ninth after Adley Rutschman reached on third-strike wild pitch to open the threat. Odor grounded into a double play before McKenna grounded out to end the game.

Rosario had two of Cleveland’s six hits to help the Guardians win the rubber game of the three-game series.