Guardians, alone atop AL Central again, look to down Royals 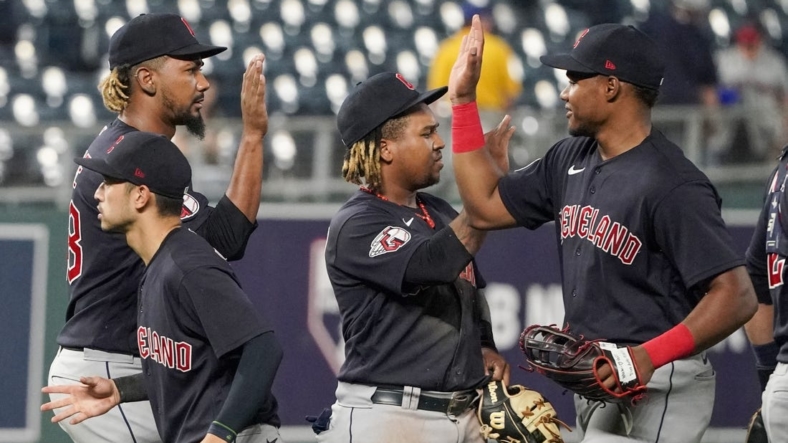 The Cleveland Guardians are where few baseball experts expected them to be — in first place in the American League Central with four weeks to go in the regular season.

Predicted by many to finish last in the division, Cleveland sits a game ahead of the Minnesota Twins and two ahead of Chicago White Sox for the division lead. The Guardians will look to increase that advantage when they continue their three-game series against the host Kansas City Royals on Tuesday.

Cleveland saw Kansas City tie the score in the eighth inning on Monday, only to bounce back and take a 6-5, 10-inning victory. Oscar Gonzalez stroked a two-run double to center to give the Guardians a 6-4 lead in the 10th. The Royals scored once in the bottom of the frame, but the Guardians hung on.

After losing five straight and eight of 10 games, the Guardians saw their four-game lead vanish as they were tied for first with Minnesota heading into Monday’s action. Cleveland manager Terry Francona acknowledged that it’s a perilous situation, but he’s not ready to panic and neither is his squad.

“This is the way we make our living,” he said. “We love trying to win. We hate when lose. This week hasn’t been the most productive week, but if you let last week affect tonight, then that’s not good. I don’t see that happening.

“We have a veteran staff and they know how to act. They’ve been through it. The guys compete. We’re not really clicking on a lot of cylinders right now, so it’s kind of frustrating.”

Francona can take solace in the fact that Bieber has a 4-0 record and a 3.38 ERA in 11 career starts against the Royals. He allowed one unearned run on two hits in 4 2/3 innings in his only appearance against them this season, in the opener on April 7.

Kansas City manager Mike Matheny doesn’t have the luxury of worrying about a pennant race. He is looking for reliable performances from his players.

“These guys need the consistency of knowing the expectation,” Matheny said ahead Monday’s game. “There are players we’d like to see and we’ll make sure to get them out there as often as we can. But that does not change the end goal. Yeah, we’d like to win this series, but what (matters) is today. Let’s take care of what we can take care of. Today we can control this game.”

The Royals have a chance to affect the Guardians’ chances to reach the postseason. In addition to the current series, the two teams conclude the season with a six-game series in Cleveland.

Bubic enters his Tuesday outing with an 0-1 record and a 14.73 ERA against the Guardians in his career. He has made three appearances against Cleveland, including one start, which came on April 10, when he got lit up for five runs on three hits in just two-thirds of an inning.