Carr can help immediately, while Morris is a member of the Class of 2022.

A 6-foot-2 guard, Carr started his college career at Pittsburgh, then spent the past two seasons with the Golden Gophers. He announced his transfer in March after Minnesota dismissed head coach Richard Pitino.

He also considered Louisville and Kansas but announced on Instagram that he chose Texas. 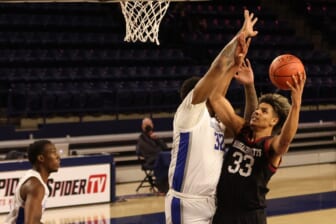 The 6-foot-3 Morris, who attends iSchool Entrepreneurial Academy in Lewisville, Texas, is ranked by the 247Sports composite as the No. 6 point guard and No. 31 overall player in the nation.

His other finalists were Georgia, Kansas and Oregon.