Gruden Pursuit Not Just About Results on the Field 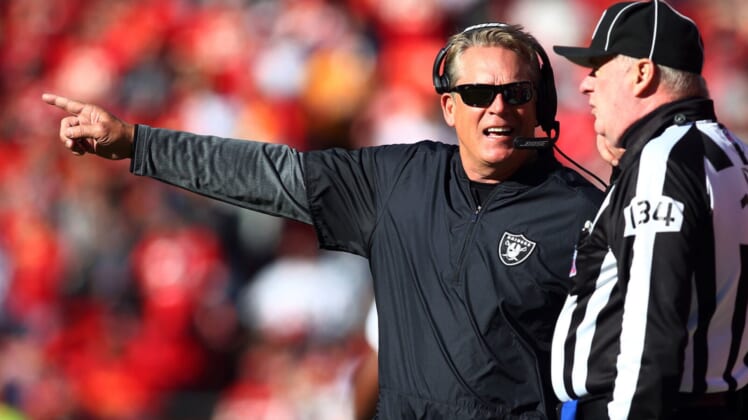 Las Vegas Raiders Report broke the national story about the Raiders serious pursuit of Jon Gruden on Friday. Why would the team look to another coach after extending their sitting head coach? It goes beyond results on the field.

Ever since our own Scott Winter broke the national story on Friday night that the Oakland Raiders were pursuing Jon Gruden, the story has dominated headlines, the NFL rumor mill, and the social media meat grinder. While national media refuse to credit this site for breaking the news about the seriousness of the Raiders pursuit of Gruden, it no longer can be denied there are serious conversations occurring.

Yet, when you look at the conversation amongst fans and even some NFL insiders, they seem to be missing the point on why the team believes now is the time. Many are making the valid argument that current head coach Jack Del Rio doesn’t deserve to get fired after just one subpar season. After all, Del Rio went 12-4 last year before the wheels fell off the offense this year under the leadership of Todd Downing.

I don’t disagree with them.

Owner Mark Davis may be looking beyond wins and losses in courting Jon Gruden.

If coaches were just evaluated on wins and losses, then there would be no valid reason for the Raiders to part ways with Del Rio, especially after they just extended his contract.

The reasons for the pursuit of Gruden, and the sudden falling out of favor for Del Rio, is a more complex and a relationship-driven issue than just wins and loses and a bad 2017. As our exclusive story pointed out, sources close to the situation assert Raiders owner Mark Davis was lied to about the firing of former offensive coordinator Bill Musgrave, and the corresponding promotion of Downing to his position.

Is the fact 2017 has been a flat-out failure on the field contributing to the pursuit of Gruden, of course. To assert its the only – and central reason – to throwing Del Rio overboard is uninformed.

In addition to the reported loss of trust in Del Rio by Davis and the Raiders brass, the Raiders also have a significant business reason to make a splash hiring someone like Gruden to take over on the sidelines.

Everyone knows the Raiders impending move to Las Vegas is a big deal for the team. They are about to enter a new era in the team’s history and they need to sell their brand in a new market that will be flush with revenue opportunities including the sale of Personal Seat Licenses (PSLs), luxury suites, and other ways to grow the brand in Nevada. Gruden and his larger than life personality are seen as a perfect fit for the bright lights of Sin City. Gruden would become the sports king (much like late UNLV basketball coach Jerry Tarkanian ruled the roost from 1973-1992) of Las Vegas and would most certainly help the transition from Oakland to the desert. He would ignite the city around Raiders football.

But do not forget about Oakland – the current home of the Raiders. With two seasons remaining in the Bay Area, bringing in Gruden would allow the Raiders to keep their fanbase there excited despite the depressing and disappointing fact their beloved Silver and Black will soon push the eject button on Oaktown. Bringing “Chucky” back to the East Bay may be a smart and calculated move to keep those fans in the fold for two more lame duck seasons.

Is Gruden the Football Messiah? Absolutely not. Bringing him back to the Raiders sideline guarantees nothing and it doesn’t mean assured success on the field. Every coach, every personality has their challenges and weaknesses. And, there is no guarantee this flirtation between Davis and Gruden will be consummated.

There is no doubting even the fact the sides are talking seriously has excited the majority of Raider Nation who have always loved and coveted Gruden. Whether based in reality or not, Gruden is Raider Nation’s dream coach and it appears his return is a distinct possibility.

Even though that is exciting for fans and the organization, it’s a tough situation for a good man in Jack Del Rio who may have no say in his future with the team.

The NFL is a tough business. But it is a business and the Raiders seem to be pursuing a new coach for reasons that go beyond the results gained – or missed – on the field

Everybody clamoring about Gruden to Raiders today, when these guys broke the story yesterday, with full analysis… https://t.co/pBBorciuCN

"Saturday, on the eve of the Raiders’ season finale, ESPN dropped a bombshell report that said Mark Davis is preparing a blockbuster offer to Jon Gruden to be the Raiders’ next head coach."

Uh, you spelled @lvraidersreport wrong! THEY dropped the bombshell on FRIDAY night! https://t.co/ijo0k5HQgu

Props to my boys @lvraidersreport for Breaking Jon Gruden Rumors before anyone else. Well done, cheers fellas.

Man you guys are awesome! Great show too! https://t.co/rp0pphMqGS