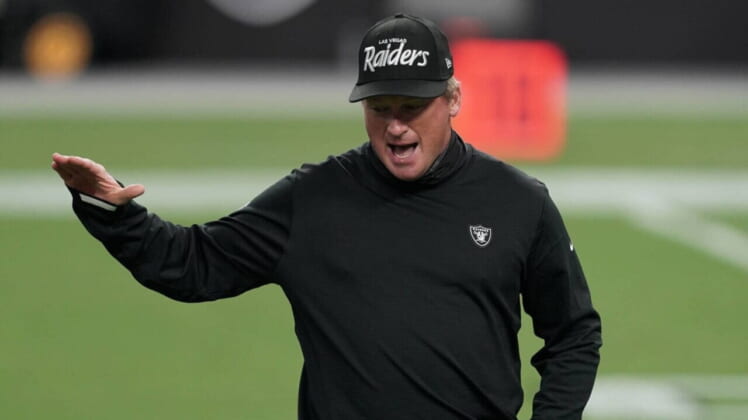 If the 2-2 Las Vegas Raiders are to win at Arrowhead Stadium on Sunday against the defending champion Kansas City Chiefs, their coach Jon Gruden needs some imagination and creativity to top Andy Reid.

On any given Sunday, an NFL team with a good collection of talent can pull off an improbable victory over an opponent that seems unbeatable. Despite consecutive losses and a laundry list of injuries, the Las Vegas Raiders, and their coach Jon Gruden, won’t head to Arrowhead Stadium and lay down for the undefeated Kansas City Chiefs. In fact, they can run over them.

The visual of the Raiders steamrolling the reigning champs seems like a fairytale, but the offense has the components to keep the Silver and Black within striking distance on the scoreboard.

Also, the Raiders Jon Gruden wants to play a style of football that can exploit a weakness in the Chiefs defense, but he has to evolve as a play-caller to pull off an upset against an NFL juggernaut.

Let’s start with the basics.

Kansas City has allowed an average of 161 rushing yards on the ground through four weeks, ranking 28th against the run. After giving up a season-high 185 yards on the ground to the New England Patriots on Monday Night Football, the Raiders should challenge the Chiefs to tackle Josh Jacobs, Devontae Booker, Theo Riddick, Jalen Richard, and Alec Ingold for three hours.

The Raiders Gruden doesn’t know if right tackle Trent Brown will play Sunday after he participated in a limited practice Wednesday, but the Raiders can use two- and three-tight end sets to clear pathways for the running backs on the edge.

Until the Chiefs prove they’re able to stop the run, which hasn’t happened yet, the Raiders should attempt to bludgeon their four-man front. That could keep the chains moving, get Jacobs back on track, keep a charitable defense off the field and force quarterback Patrick Mahomes to watch most of the game from the sidelines altogether.

“The biggest thing is we knew that when (Carr) did take shots downfield, we understood it pre-snap by the formation, and it put us in a position to make a play,” Mathieu said. “Tight ends, running backs, check-downs, that’s his game.”

Although Jacobs has struggled to grind out yards through the interior gaps with guard Richie Incognito (Achilles) on injured reserve, Gruden can use his lead running back in the passing game and take shots downfield to make sure Mathieu doesn’t know what’s coming—consistent checkdowns.

Chiefs defensive coordinator Steve Spagnuolo may drop Mathieu into the box to help out the run defense against Jacobs, but if Gruden splits the running back out wide or takes some deep shots to Henry Ruggs III (if available) or Nelson Agholor, Mathieu cannot simply cheat in the box or in the intermediate zones.

When Mathieu plays downhill or helps out over the top with Ruggs, Carr can target the second level of Kansas City’s defense with tight end Darren Waller. Chiefs linebackers Anthony Hitchens, Damien Wilson and Ben Niemann have allowed 15 receptions out of 20 targets for 210 yards and a touchdown.

In addition to attacking the Chiefs susceptible defensive line and soft coverage areas on the second level, quarterback Derek Carr must take some deep shots to loosen up the box for Jacobs and force Mathieu to think before he reacts on every down. If he knows where the ball is going, the two-time All-Pro safety can wreck an offensive game plan.

A Little Spice Added to the West Coast Offense?

As noted above, Carr cannot become a spectator in this matchup even though the Raiders should run the ball 30-35 times against one of the NFL’s worst run defenses. He has to take some shots to the fastest wide receiver on the field in Ruggs or Agholor to keep an extra defender out of the box on every down. Gruden must get creative with his playcalling and bring some unexpected wrinkles.

The Chiefs likely expect a heavy dose of Jacobs, but Gruden should mix in some curveballs with play-action designs to draw defenders in and burn them downfield.

According to Pro Football Focus, Carr has completed 26-of-35 passes for 291 yards and two touchdowns out of play action.

Kansas City fields the third-ranked pass defense, and the unit has done a good job at limiting big plays. Carr’s numbers are abysmal at Arrowhead Stadium:

However, the element of surprise with targets to Ruggs or Agholor downfield can potentially catch the Chiefs while they’re looking in the backfield for Jacobs to tote the rock.

Forget Carr’s stats for this game, he must show the willingness to do something Kansas City’s defense doesn’t expect Sunday—some extra deep throws could essentially open up the offense. This approach alters Gruden’s west coast offense a bit, but he must show the Chiefs a new wrinkle in his game plan.

Not an Impossible Task

Offensively, the Chiefs offense has clicked early (ninth in scoring), and the Raiders have allowed 30 or more points in three out of four games. With that said, it’s a copycat league, and Kansas City can slip up in a close contest. Let’s take a look at three of their last four losses, which date back to October and November of last year.

The Houston Texans, Indianapolis Colts and Tennessee Titans all ran for 180-plus –yards against the Chiefs in their victories. The Texans and Colts logged 41 and 45 rush attempts, respectively.

With the bye coming up next week, the Raiders and Jon Gruden don’t have to worry about leaving anything in the tank. Gruden should feed Jacobs at least 25 times and give him three-to-five touches in the short passing game. Booker, Riddick and Richard should be active to spell Jacobs and maintain the attack on the Chiefs’ defensive front.

With Ruggs possibly on the field, each running back could make some moves after the catch on underneath routes, but the threat of a speedy wideout catching a 30-yarder over the top makes the go-to plan less predictable.