Gruden Fallout: Raiders searching for answers on and off the field 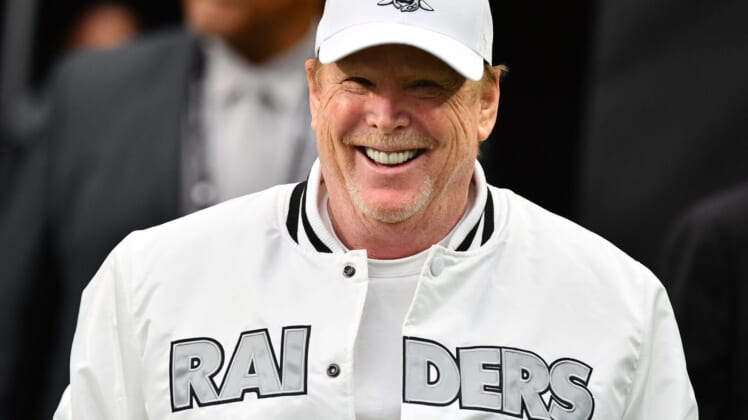 In what was a quickly escalating crisis last Friday, the Las Vegas Raiders were getting ready for a home game against the Chicago Bears. Head coach Jon Gruden, who resigned Monday after more emails surfaced with anti-gay, sexist, and other inappropriate language surfaced, took to the field with a team clearly distracted.

The end result was a flat team that lost to a struggling Bears squad led by a rookie quarterback. It was the Raiders second-straight subpar performance and loss, dropping them to 3-2 after a blazing 3-0 start.

It’s a stark about-face for a team that was the talk of the NFL the first three weeks of the season for its play on the field. Now, has so often been the case over the past two decades, the Raiders are again in the national spotlight for the wrong reasons. Instability, controversy and open questions for a team that appeared to be riding high on and off the field in their new home of Las Vegas.

The aftermath of the Gruden disappointment for Raider Nation and team owner Mark Davis will be long-lasting. There will be no quick recovery from this.

The fall from grace for Jon Gruden has been a mighty one. Welcomed back to “right a wrong” as so many in Raider Nation viewed the return of Gruden in 2018, many of those same fans sit disappointed in Gruden’s conduct uncovered in the emails and with his lack of success thus far on the field. The shine was starting to wear off in what was a crucial year for coach and team. Now, disgraced and disowned by even those who propped him up with softball questions and dare not call him on the carpet for current letdowns, Gruden’s legacy in his second stint is littered with potholes, traps and questions left unanswered.

The aftermath of the Gruden disappointment for Raider Nation and team owner Mark Davis will be long-lasting. There will be no quick recovery from this. Even experienced and well-respected interim coach Rich Bisaccia has a monumental task ahead of him to refocus his team and get past this Gruden-created mess. You can’t write off this team and its character, but the odds are certainly against them in so many ways.

While you can understand the internal shock to the organization Gruden’s resignation created late Monday night, the fact Mark Davis did not address the media the day after was an error, in my view. Yes, they need time to recover and set a course for the future — there’s no question of that. But for the owner, the man who brought in Gruden and ultimately shoved him out the door, there were questions to answer and the opportunity lost to reiterate the Raiders stance on dealing with issues like this. I have no problem with players and coaches not being available. They need to regroup and get ready for Denver Sunday. They get a pass. But not Davis.

It’s hard not to think how his father, the late Al Davis, would have handled it differently.

He made the right decision in canning Gruden, but was it his decision? There’s chatter the NFL has been unhappy with Davis in recent months despite all that they “gave” him — relocation, a new stadium, etc. This could explain the Godfather-like “whacking” of Gruden (well-deserved) despite what must be a trove of troubling information from the Washington Football Team investigation that outed the Raiders now-former coach.

Davis must sit and explain how the process unfolded when he knew about the totality of the emails, and why his hand was forced if he knew more earlier. I have no doubt it was hard for Davis who is close to Gruden personally and spent years trying to lure him back to the sideline. Still, he needs to have that conversation so fans know how it all happened.

In situations like this, transparency is always the best policy so it’s my sincere hope Davis talks and talks soon.

Despite the nice start to the season, the Raiders have struggled two weeks in a row despite a better defense and a high-flying offense that is now officially a slow-starting unit. The defense, which just a few weeks ago ranked as a middle-of-the-road (15) unit, has plummeted to 20th after consecutive losses and the inability of the offense to be consistent.

Derek Carr and the offense have been flat-out awful starting games. Their inability to score on opening drives (an 11-game drought) and in the first half, means they’ve trailed in every game this season. Two weeks ago against LA, they mustered just 54 yards in the first half including no yards of offense in the first quarter. Against Chicago, they weren’t much better. In fact, the Raiders non-existent running game accounted for 71 yards while the team was penalized for 82.

Carr, who started off as a bonafide MVP candidate after three games, has regressed as his offensive line continues to struggle. After passing for over 300 yards in three consecutive games, Carr has passed for under 210 yards in the two losses. His receiver’s focus was not there against the Bears as drop after drop doomed key plays. Add in unforced penalties and just a general lack of rhythm, and Carr and the offense are sputtering.

Despite all of that, the Raiders are 3-2 and face a Denver team that is spotty at best. The game Sunday, in the middle of this mess created by their coach and franchise, is a massive one if this team is to stay in the hunt in the AFC West. A third consecutive ugly loss could begin a tailspin the now leaderless Raiders can’t pull out of.

It’s a tall task forBisaccia who has an almost impossible job to do. His coaching staff and owner Mark Davis need to make sure they do whatever it takes to keep the focus on the field and any of the other nonsense needs to be owned and addressed by Davis.

Not lost in all of this remains the fact the media industrial complex in the NFL is protecting the league and their own corporate pockets. Despite saying otherwise, there must be even more disturbing emails we’ve yet to see. They weren’t leaked like the Gruden emails. The Raiders and Gruden were sacrificial lambs by their own hands and the NFL.

Revelations of prominent TV personalities sending articles for pre-approval by league executives, the lack of transparency into the WFT investigation, and the buddy-buddy nature of the league with journalists with financial interests directly in the league is subverting the pursuit of truth. Yes, there are still objective and hard-working writers and broadcasters who do it the right way. But they’re no longer the majority and so some truths and facts will never see the light of day. Not because they’re non-existent. It’s because, in some cases, all is being done to protect the cash cow that is the NFL. That’s for daily newspapers, television networks, and prominent online sites as well.

The reality for Raiders players and fans is this: you won’t get much in the way of satisfaction on where this team is going until after the beginning of the year. The Raiders will not hire a new head coach until then, they won’t make a decision of the future of GM Mike Mayock until then, and roster management is completely in flux until leadership — at all levels — is in place.

In the past few months, the Raiders have lost president Marc Badain, their head coach Jon Gruden, are under the cloud of reported financial improprieties that included the defection of several font office executives and are struggling to fill Allegiant Stadium amid a vaccine requirement. Of course, it wasn’t supposed to be this way. With a new stadium, new headquarters, a charismatic leader in Gruden, and exciting new home in Las Vegas, this franchise was to be ascending.

Now, it’s in shambles. How long will it be? That depends on what Mark Davis does and how he leads this battered organization forward. Comfortable in his new-found Vegas celebrity, including his new toy in the WNBA’s Las Vegas Aces, Davis needs to lead the franchise forward and pick the leadership that can get this thing back on the right track.

It won’t be easy but the fans of Raider Nation deserve it. So do the men who wear, and bleed for, the silver and black each Sunday.

In every crisis and amidst misfortune, there is a great opportunity to sail into calmer waters on a journey to a better place. For the Raiders and their fans, let’s hope the captain of the ship is ready at the helm.