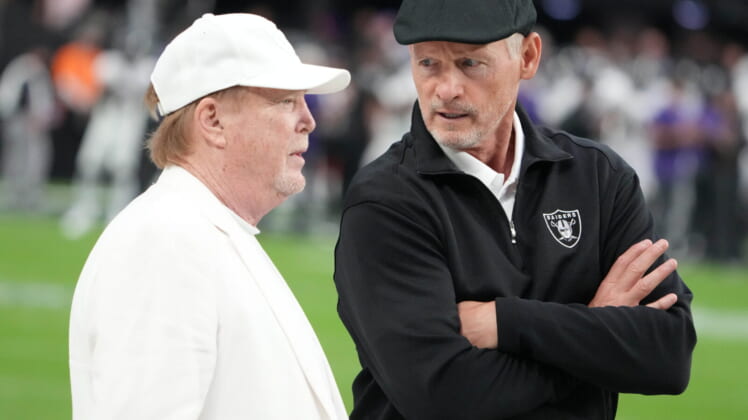 Following former Las Vegas Raiders head coach Jon Gruden’s resignation on Monday night, most people have fast-forwarded to the 2022 offseason with thoughts about long-term candidates to replace him. But the 2021 season isn’t over, and general manager Mike Mayock and his job are likely on the line.

On the Rich Eisen Show, Mayock basically admitted that he feels the heat on his general manager seat:

Gruden and Mike Mayock worked together for the last three drafts, which has some impressive hits and early-round whiffs. From the 2019 class, fourth-round defensive end Maxx Crosby and fifth-round wide receiver Hunter Renfrow have already exceeded expectations. Rookie fifth-rounder Nate Hobbs may pan out into a solid slot cornerback.

Third-year running back Josh Jacobs has a Pro Bowl season on his resume. Before the club placed cornerback Trayvon Mullen on injured reserve with a foot injury, he played at the level of a quality starter on the boundary. Wideouts Henry Ruggs III and Bryan Edwards have shown noticeable second-year improvement as starting contributors.

On the flip side, defensive end Clelin Ferrell, a 2019 first-rounder, and cornerback Damon Arnette, a 2020 first-rounder who’s currently on injured reserve with a groin injury, lost their starting jobs this past offseason. Two of the Raiders third-rounders from last year, wideout Lynn Bowden Jr. and linebacker Tanner Muse, didn’t make the 2021 roster. The club traded the former as a rookie.

Mike Mayock had a hand in the Raiders’ rebuild, which started in 2018, a year before he accepted the general manager role. Since 2019, the team has had an 18-19 record, and he laid out playoff expectations for the 2021 term:

Gruden’s resignation isn’t going to change Mike Mayock’s expectations nor should it. While some fans may want to pack it in for the season and brace for a full rebuild, the Raiders general managers still have a lot on the line over the next few months. His future likely hinges upon how this team finishes the season.

While we can debate about how much power Mike Mayock had with Gruden as the head coach, we know the dynamic will change for the remainder of the term. NFL Insider Adam Caplan reiterated something that’s clear now; Mayock will have full personnel control over the team.

With the trade deadline weeks away, Mayock can still make some moves in an attempt to patch up the Raiders offensive line. Perhaps he’ll bring in right tackle Rick Wagner for a tryout to replace Brandon Parker, who struggled in his first start of the season, allowing three quarterback pressures in Week 5 against the Chicago Bears, per PFF.

In other words, we’re going to see how the Raiders operate with Mike Mayock as a full-capacity general manager, which draws some intrigue for a team that needs quality play from its offensive line to possibly get back on the right track.

The Raiders announced that special teams coach Rich Bisaccia will serve as the interim head coach. The offense may undergo some changes with Greg Olson likely to take over play-calling duties, per Caplan. Nevertheless, he worked closely with Derek Carr for five seasons, dating back to the quarterback’s 2014 rookie term. He could keep what worked for this unit and leave his imprint on the offense for the next 12 games.

If the Raiders season spirals out of control, fans will have plenty of time to cycle through head-coaching candidates, though the team should keep tabs on Dallas Cowboys offensive coordinator Kellen Moore, who’s calling plays for the league’s No. 2 scoring offense.

In the meantime, Mike Mayock has a chance to right the ship for a team that’s 3-2 with enough talent on both sides of the ball to win some games. For a general manager with an uncertain future, expect Mayock to make a strong push to put this team in the playoff picture down the stretch. Don’t close the book on this season yet.