Gruden discusses injuries ahead of MNF 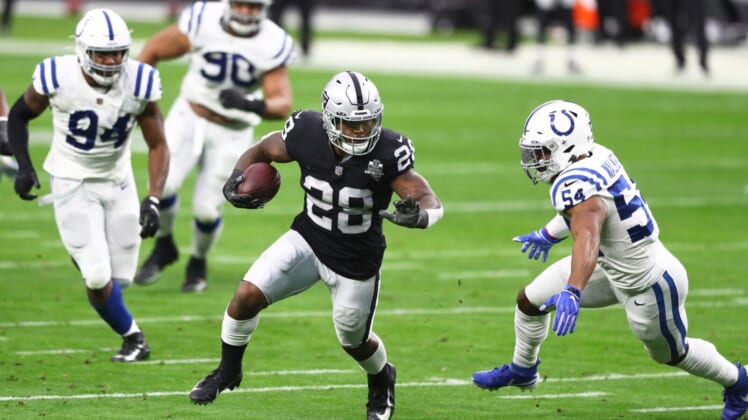 With the Raiders taking on the Chargers for Monday Night Football, injury designations loom ahead of the 5:15 p.m. kickoff on ESPN. Raiders coach Jon Gruden discusses injuries.

For the last couple of weeks, running back Josh Jacobs has been sidelined with an ankle injury and did not appear in the games against the Pittsburgh Steelers and the Miami Dolphins.

Gruden said Jacobs will be a game-time decision ahead of the Monday evening kickoff.

“We’re going to list him as questionable,” Gruden said. “We’ll run him around game day and see how he feels.”

One of the silver linings behind Jacobs being out is it allows running back Peyton Barber – who has been with the team for only about a month – to not only study the playbook but also to apply those plays to the practice field.

In addition, running back Jalen Richard, who’s been out since early August with a foot injury, was recently cleared to practice and has started to get reps as he works back to full strength.

“We are still getting Peyton Barber the reps he needs to learn our offense,” Gruden said. “He just got here. We’re working Jalen Richard back. He hasn’t practice since the first part of August and we’re working Jacobs back in. So, I would think he’s very questionable and we’ll let you know Monday night.”

As Barber is learning the offense, the Raiders are still deciding how much they should run or throw the ball.

Gruden said his team is ultimately trying to figure out how get to 4-0 for the first time since 2002, especially with a play caller like Derek Carr, who has used his arm to lead the team and was named NFL Offensive Player of the Month for September.

“We just want to win,” Gruden said. “If we have to throw it, we’ll throw it. We do want to run. We’re trying. We’ll continue to try. But we want to win the game. We got the running game going a little bit last week.

“We certainly know how hard it is to do it in this league and we have to do it the old-fashioned way. We don’t run a lot of zone reads and our quarterback is a guy that we’re counting on to throw from the pocket and not run from the pocket a lot.”

Gruden discusses injuries to other players

A couple of players to watch for Monday night are cornerback Trayvon Mullen Jr. and safety Roderic Teamer, who both were limited participants on Thursday and Friday’s practices were fully active in Saturday’s practice.

Rookie cornerback Nate Hobbs, who is dealing with a shoulder injury, was limited for Thursday’s practice, but was a full participant Friday and Saturday.

Like Hobbs, defensive tackle Solomon Thomas was limited on Thursday but practiced fully on Friday and Saturday.

Gruden only gave a game status to Jacobs.

On Monday night, the Raiders take on a Chargers team with a new coaching staff, led by head coach Brandon Staley, who has also spent coaching time with the Los Angeles Rams, the Chicago Bears and the Denver Broncos.

With the new Chargers’ coaching staff, three games are not enough film for the Raiders to watch, so they’ve been looking at other film, which has made it difficult for the Silver and Black to prepare.

“We’re having a hard time with this one honestly because they have a new staff,” Gruden said. “You end up watching more Ram tape than you do Charger tape. You end up watching New Orleans Saints tape to see where the origins of some of these plays are coming from. So, it’ll be a challenge for us. They’re a mystery. They’re a very talented, well-coached team, but they’ll be a mystery. It’ll be a tough game for us.”