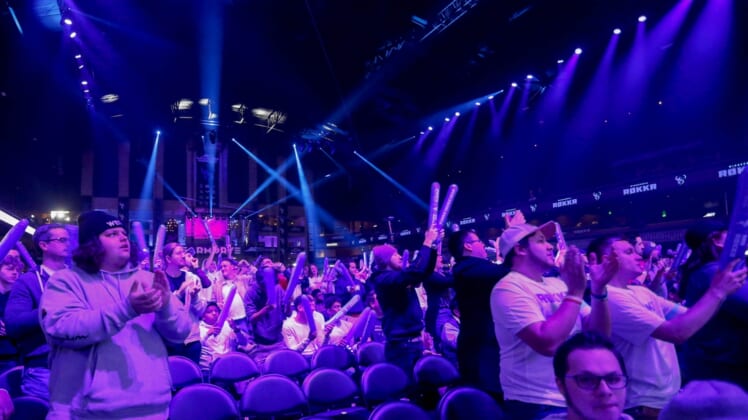 Gaimin Gladiators took first place in Group B and Team Spirit, Thunder Awaken and TSM won tiebreakers to round out the group’s top four seeds as Group Stage action concluded Sunday at ESL One Stockholm in Sweden.

The Gladiators defeated Fnatic 2-0 to finish the stage with an 8-4 map record (3-2-1 match record). After Thunder Awaken drew with TSM, there was a four-way tie left at 7-5 between Thunder Awaken, TSM, Team Spirit and Team Liquid.

A series of six best-of-one tiebreaker matches was used to determine which three organizations would begin this week’s playoffs in the upper bracket. Liquid was the odd team out after losing all three of their matches, meaning they will have to open the playoffs in the lower bracket.

Also Sunday, OG, BetBoom Team and T1 joined Group A winner Tundra Esports as the four Group A teams advancing to the upper bracket of the playoffs. BOOM Esports and beastcoast took fifth and sixth in the group and will start in the lower bracket, while Evil Geniuses was eliminated due to their last-place finish.

Fourteen teams from around the world entered the season’s first major (prior to Mind Games’ disqualification), beginning in two groups of seven in a round-robin Group Stage. All Group Stage matches were best-of-two. The top four teams in each group qualified for the upper bracket of the playoffs and the fifth- and sixth-place teams will start in the lower bracket.

The playoffs will begin Monday with best-of-three matches until the best-of-five Grand Final on May 22. The winning team will earn a $200,000 grand prize.

Dota Pro Circuit previously removed Mind Games from the competition due to ongoing travel visa issues for multiple team members. Every team in Group B received a tally in the win column for any match scheduled against them.

Thunder Awaken had the best performance in the Group B tiebreakers, defeating every other participant to go 3-0. They beat TSM in 35 minutes on red, Liquid in 36 minutes on green and Spirit on 48 minutes on green, earning the group’s second seed.

In Group A, Tundra Esports had already clinched first place and padded their advantage with an easy win over T1. Tundra won in 23 minutes on red and 30 minutes on green.

OG earned the second seed over BetBoom by winning their head-to-head finale. OG won in 43 minutes on red and 45 minutes on green, leaving BetBoom to settle for third in the group.

Evil Geniuses could not improve its last-place position with a 1-1 tie against beastcoast.