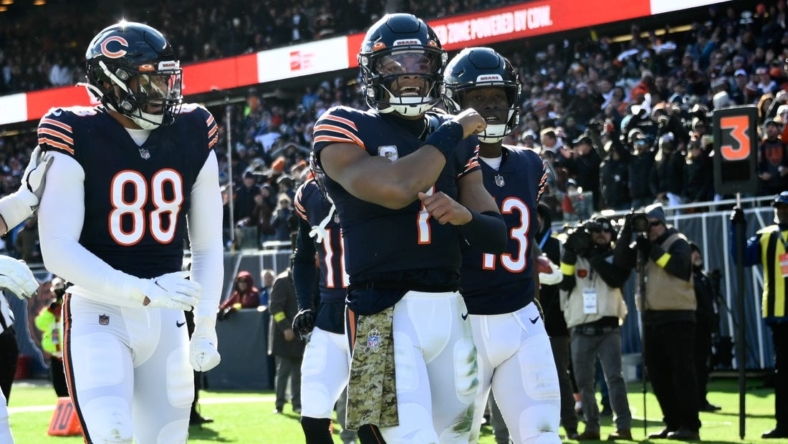 Two of the best rushing attacks in the NFL meet on Sunday in Atlanta, when the Chicago Bears run into the Falcons.

The Falcons are fourth in the league in rushing, averaging 160.4 yards per game, while the Bears average a league-high 201.7.

Atlanta (4-6) has dropped two straight to go from leading the NFC South to second place behind the Tampa Bay Buccaneers (5-5).

The Bears (3-7) coughed up a lead and lost a 31-30 decision to the Lions last week. Chicago has dropped three straight and six of its past seven games to sink into last place in the NFC North.

Quarterback Marcus Mariota went 19-for-30 passing for 186 yards with two touchdowns and an interception, but he was sacked five times, preventing the Falcons from finding their groove offensively in a 25-15 loss at Carolina on Nov. 10.

Led by Mariota’s three carries for 43 yards and Caleb Huntley’s 32 yards on five carries, the Falcons ran the ball for 138 yards on 25 touches against the Panthers.

Mariota has completed 61.9 percent of his passes for 1,747 yards with 12 touchdowns and seven interceptions, in addition to rushing for 347 yards and three scores on 63 carries. Tyler Allgeier, who has rushed for 443 yards and one touchdown, and Cordarrelle Patterson, who has 402 yards and five scores, headline the formidable rushing attack.

For the Bears, Justin Fields continued his rise as franchise quarterback in the loss to the Lions.

Despite throwing an interception that was returned for a touchdown, he completed 12 of 20 passes for 167 yards and two touchdowns, in addition to running for 147 yards while scoring on runs of 1 and 67 yards.

Fields has rushed for 325 yards in the past two games, the most by a quarterback in NFL history, besting Lamar Jackson, who ran for 268 for the Ravens on Oct. 13 and 20 during his MVP season in 2019.

Fields may have to take on even more of the running game. Khalil Herbert (643 yards, four TDs) was placed on injured reserve with a hip injury on Tuesday. David Montgomery, who has rushed for 434 yards and two scores on 115 carries, will likely see an increased workload.

“When you’re looking at different types of places to go, you take spots for that reason,” Bears coach Matt Eberflus said. “The No. 1 spot you look at is quarterback. You study and look at that and I loved what I saw.

“I’m loving what I’m seeing even more since I’ve been here for this amount of time.”

For the Falcons, cornerback A.J. Terrell (hamstring) and safety Erik Harris (foot) were limited in practice on Wednesday, while tight end Feleipe Franks (calf) didn’t participate. All three have not been ruled out for Sunday, according to Smith.