Multiple reports indicate that Rondo received a contract buyout from the Grizzlies and is likely to sign with the Los Angeles Lakers on Monday once he clears waivers.

Memphis acquired Rondo from the Los Angeles Clippers as part of a trade announced Aug. 16 in which Eric Bledsoe went to Los Angeles. 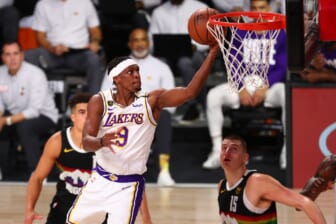 Rondo split last season between the Atlanta Hawks (27 games) and Clippers (18) and averaged 5.4 points and 4.4 assists.

Rondo was a four-time All-Star earlier in his career when he starred for the Boston Celtics. He played eight-plus seasons with Boston until being dealt to the Dallas Mavericks in December 2014, and has since played with the Sacramento Kings, Chicago Bulls, New Orleans Pelicans, Lakers, Hawks, and Clippers.

Related: NBA Power Rankings – Where all 30 teams stand at the start of the season