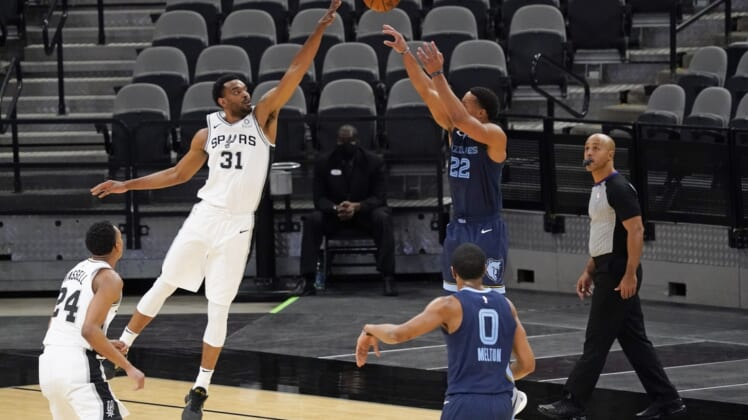 The red-hot Memphis Grizzlies take their seven-game winning streak into the second leg of a back-to-back set on Tuesday, facing the Indiana Pacers in Indianapolis.

Memphis blasted the host San Antonio Spurs 133-102 on Monday behind a franchise-record nine players scoring in double figures. Gorgui Dieng led the way with 19 points on 8-of-10 shooting from the floor, and his nine rebounds matched Xavier Tillman for the team high.

The victory was the second for the Grizzlies since they restarted competition on Jan. 30. The NBA postponed five scheduled games over the previous two weeks due to COVID-19 protocols.

“Having fresh legs after having those couple of weeks off (and) our team stayed kind of locked in during that break,” forward Brandon Clarke said to Fox Sports Southeast in his postgame interview regarding the key to back-to-back wins over San Antonio. “There’s some teams and players that would not stay locked in during that, but our team has guys (who) really, really want to win.”

Before the postponements, Memphis welcomed back to the lineup Ja Morant, the 2019-20 NBA Rookie of the Year and the team leader this season in scoring (20.7 points per game) and assists (7.7 per game).

Morant missed eight games with an ankle injury, and the Grizzlies lost four of the first five he was sidelined. Their current winning streak began before his return and continued in his first game back, a 106-104 win over the Eastern Conference-leading Philadelphia 76ers on Jan. 16.

The Grizzlies bring their surging offense against an Indiana defense allowing 111.2 points per game overall and 117.9 per game in losses. The Pacers gave up 119 points their last time out, a nine-point defeat against Philadelphia on Sunday.

“The defensive end is the key,” Indiana guard Malcolm Brogdon said. “Everybody is going to be focused on missed shots, (Philadelphia’s) zone and all that. We just didn’t get stops. Defensively, we may have let up.”

Indiana defense gave up 107.5 points per game in 2019-20, with the increase this season a byproduct of giving up 39.1 percent shooting from 3-point range. That is one of the worst averages in the NBA, after finishing last season with the league’s fourth-best 3-point defense at 34.1 percent allowed.

Memphis comes into Tuesday’s matchup shooting 35.6 percent from outside, ranking near the middle of the NBA. However, its offense focuses instead on interior points, attempting more than double the amount of 2-point field goals than 3-pointers.

The Grizzlies have had to find ways to balance their scoring production with a bevy of absences throughout the season. In addition to Morant’s eight missed games, Memphis has been without Jaren Jackson Jr. (knee) for the duration of the campaign.

Jontay Porter (knee) and Justise Winslow (hip) are out with injuries while Grayson Allen and Jonas Valanciunas missed Monday’s blowout due to COVID-19 protocols.

Indiana has been hindered by its own health concerns. T.J. Warren played only four games before sustaining a foot injury that still has him sidelined.

The Pacers added Caris LeVert from the Brooklyn Nets in a four-team trade that sent two-time All-Star Victor Oladipo to Houston. However, LeVert, a breakout star for the Nets last season, may not play again this season after undergoing surgery for cancer discovered on his kidney during his pre-trade physical.