One day after Beverley’s trade to Memphis became official, the Grizzlies traded him to the Minnesota Timberwolves for Jarrett Culver and Juancho Hernangomez, ESPN reported Tuesday.

Beverley was one of three players traded by the Los Angeles Clippers to Memphis in the Eric Bledsoe deal. Now he takes his firebrand defense to play for Chris Finch at Minnesota.

Culver, 22, is a former lottery pick who has averaged 7.8 points per game in his first two seasons with the Timberwolves. The Phoenix Suns selected Culver No. 6 overall in the 2019 draft, then traded him to the Timberwolves for Cameron Johnson and Dario Saric. 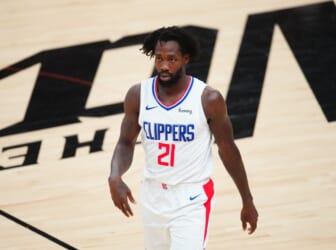 Culver’s 2020-21 season ended in April with an ankle injury that required surgery. He first injured the ankle in January.

He averaged 5.3 points and 3.1 rebounds in 34 games (seven starts) in his second NBA season. That marked a decline in production from his rookie campaign, when he averaged 9.2 points and 3.4 boards in 63 games (35 starts).

Hernangomez, 25, is another first-round pick headed to Memphis. He averaged 7.2 points and 3.9 rebounds in 52 games (six starts) last season for the Timberwolves.

Hernangomez played his first three-plus seasons for the Denver Nuggets, who drafted him No. 15 overall in 2016. Hernangomez was traded to Minnesota in February 2020 as part of a four-team deal. For his career, he’s averaging 5.7 points, 3.5 rebounds and 16.4 minutes per game in 257 contests (57 starts) for the Nuggets and Timberwolves.

Beverley, 33, averaged 8.0 points and 4.6 rebounds in 177 games with the Clippers and has scored 8.8 points with 4.3 rebounds and 3.4 assists in nine seasons with the Houston Rockets and Clippers.