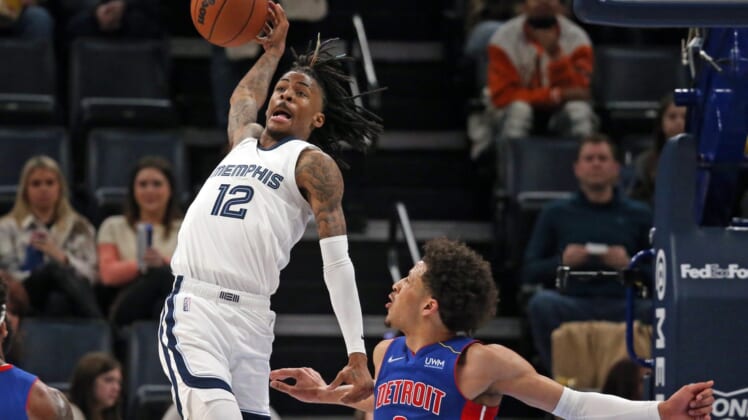 Jan 6, 2022; Memphis, Tennessee, USA; Memphis Grizzles guard Ja Morant (12) attempts to save a ball form going out of bounds during the first half against the Detroit Pistons at FedExForum. Mandatory Credit: Petre Thomas-USA TODAY Sports

Ja Morant had 22 points, nine rebounds and six assists and the Memphis Grizzlies extended their winning streak to seven games by rolling past the visiting Detroit Pistons 118-88 on Thursday.

Saben Lee led the Pistons with 14 points off the bench. Cade Cunningham had 12 points but shot 5-for-19 from the field. Hamidou Diallo also scored 12 points and grabbed six rebounds, while Trey Lyles tossed in 10 points and made six rebounds.

Detroit was playing the second game of a back-to-back after getting blown out in Charlotte on Wednesday. The Pistons have lost 20 of their last 23 games. The Pistons’ last lead on Thursday was 4-2 in the opening minutes.

Memphis racked up 70 points in the paint compared to 42 by the Pistons. The Grizzlies also outscored them 21-11 on fast-break points and also dominated the boards 61-39. Steven Adams led them in that area with 14 rebounds and De’Anthony Melton snared eight.

Williams scored 11 points in the first quarter as the Grizzlies raced to a 32-18 lead. Morant and Williams had 14 points apiece by halftime and Jones added 12 as Memphis led 62-46 at the break. Cunningham topped Detroit with 12 points and four assists but the team shot 36.2 percent from the field.

After Diallo began the second half with a dunk, the Grizzlies swiftly quashed any hopes of a Pistons comeback. Memphis scored 12 unanswered points to make it 74-48. Brooks scored the first eight points during that span and Morant supplied the last four, along with adding two assists on Brooks’ buckets.

Morant had another basket and assist during a 6-0 spurt that gave Memphis a 30-point advantage at 82-52. The lead was 90-68 entering the fourth. The Grizzlies then scored the first six points of the quarter, including four from Clarke.