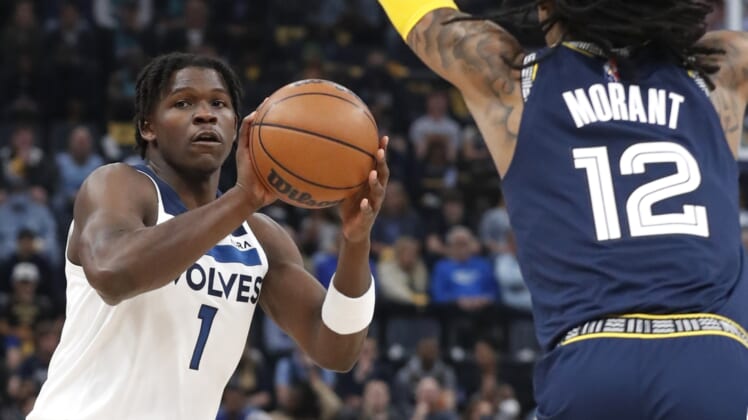 The Memphis Grizzlies will ride the momentum of the franchise’s largest margin of victory in a playoff game into Minneapolis for Thursday’s Game 3 clash against the Minnesota Timberwolves.

The Grizzlies are 1.5-point favorites at BetMGM, where they have been backed by an overwhelming 82 percent of the spread bets and 83 percent of the handle. The line opened at 2.0 at DraftKings (82, 82 percent) and PointsBet, but had moved to 2.5 at the latter by Thursday with Memphis backed by 74 and 76 percent of the action, respectively.

Ja Morant collected 23 points, 10 assists and nine rebounds on Tuesday as the second-seeded Grizzlies evened their Western Conference first-round series at one win apiece with a 124-96 rout in Memphis.

Morant wasn’t alone, however, as he was one of seven Grizzlies to finish in double-digit scoring. Jaren Jackson Jr. and Desmond Bane each had 16 points, while Xavier Tillman Sr. (13), Brandon Clarke (13), Ziaire Williams (13) and Tyus Jones (10) added contributions off the bench.

That type of balance was key in the eyes of Memphis coach Taylor Jenkins, and he made sure to point it out.

“So many different contributions,” Jenkins said. “Obviously one of the biggest one is (Tillman). So proud of him staying ready, coming out, making a tremendous impact defensively and offensively. Defensively rolling, offensive rebounding, (isolation) defense, pick-and-roll defense. Brandon doing what he’s doing. Ziaire had a great night (Tuesday) as well. Tyus being a floor general, (De’Anthony Melton) having a good second half.”

The Grizzlies outscored Minnesota by a 60-34 margin in the paint and held a 48-40 edge in rebounds, including 14-4 on the offensive end.

Anthony Edwards followed up his 36-point performance in the seventh-seeded Timberwolves’ 130-117 victory in Game 1 with 20 points on Tuesday. Karl-Anthony Towns had 15 points and D’Angelo Russell finished with 11, each well below their season averages for the regular season.

“I think, No. 1, it’s just executing our game plan,” Jenkins said. “I thought the communication was great. I mean, you’re not going to stop (their stars). They’re still going to get to their spots on the floor. Can you just make it as tough as possible?”

While Edwards tipped his cap to the Grizzlies for evening the series, the 20-year-old said he expects a different result when the series shifts to a different venue.

“We stole one in their home court. We 1-1 now,” Edwards said. “I’m not worried. I hope my teammates aren’t worried. We’re going back to Minnesota. They got to come to our house and play us twice at the crib. Our crowd, I’ll put our crowd up there with the best of them.

“It’s their problem to deal with.”

Towns also downplayed the significance of just one loss in the series.

“I don’t remember the last team that won 16 in a row,” Towns said. “We shouldn’t be too worried. This is a series. There’s a reason why it’s a series.”

Russell, however, has limped out of the blocks to begin this series. He is shooting just 5 for 22 from the floor after making 3 of 11 attempts on Tuesday.

“They’re going to get into you,” Timberwolves coach Chris Finch said. “They’re going to make it uncomfortable, no matter whether they deny or get it and pressure you. We’ve got to find a way to get him some easy looks.”

The Under has been popular at all three sportsbooks.

The market opened at 238.5 points at BetMGM but shifted to 236.5 with 78 percent of the bets and 74 percent of the handle backing the Under. The same has been true at DraftKings, where 66 and 68 percent of the action has supported the Under on the 237.5-point line.