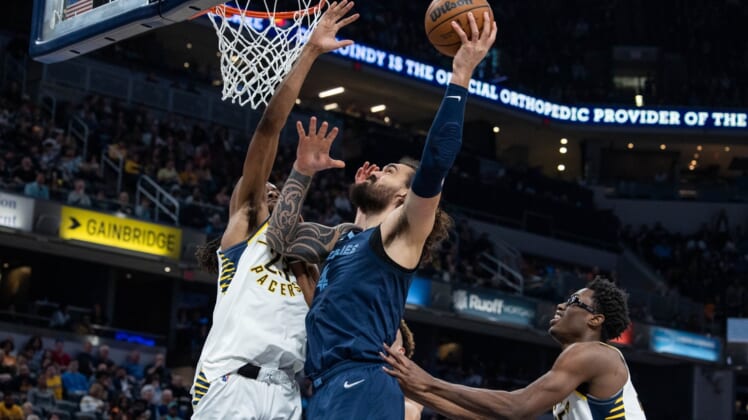 Desmond Bane scored 21 points to lead a balanced attack as the Memphis Grizzlies cruised to their fourth straight win, a 135-102 decision against the Indiana Pacers on Tuesday in Indianapolis.

Jaren Jackson Jr. contributed 19 points and eight rebounds for the Grizzlies, who led by as many as 43 points despite playing without star guard Ja Morant (back soreness).

Jalen Smith led the Pacers with 15 points. Buddy Hield and Terry Taylor scored 14 points apiece and Duane Washington Jr. had 13. Malcolm Brogdon returned from a two-game absence caused by a concussion and had 12 points and five assists.

Memphis held a seven-point advantage after the first quarter before taking a commanding 74-49 lead into halftime. Indiana has lost five of its past six games, including two straight.

The Pacers, who had won their last four meetings against Memphis, moved ahead 22-21 late with 3:43 left in the first quarter. The Grizzlies closed the period on an 11-3 run and never trailed again.

Memphis extended the lead to 72-45 with 1:05 left in the first half after Melton drilled the second of back-to-back 3-pointers.

The Grizzlies outscored Indiana 42-24 in the second quarter. The Pacers shot 3 of 14 from beyond the arc in the first half.

Bane, who scored in double figures for the seventh straight game, hit a 3-pointer with 6:54 left in the third quarter to put the Grizzlies ahead 92-55.

Tyus Jones logged eight points and 10 assists for Memphis, which improved to 24-12 on the road.

The Grizzlies limited Indiana to 42.3 percent shooting from the field and 6 of 30 (20 percent) from 3-point range. Memphis improved to 23-0 this season when scoring at least 120 points.

Morant participated in pregame warmups and is expected to be available when the Grizzlies continue their four-game road trip against the Atlanta Hawks on Friday.

The Pacers visit the Houston Rockets on Friday.