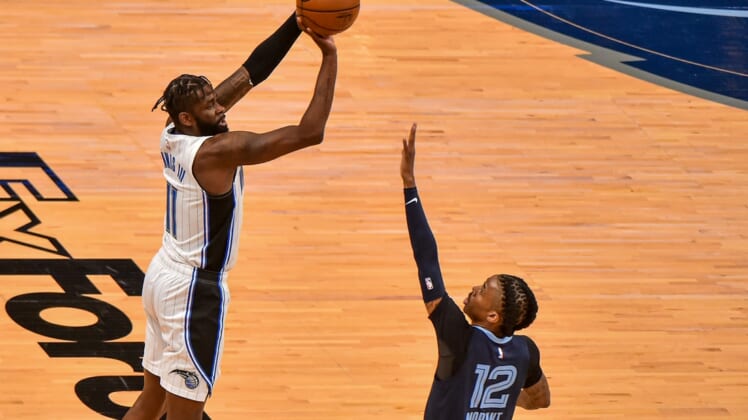 Dillon Brooks scored 16 of his 20 points in the second half to lead the host Memphis Grizzlies to a 92-75 win over the Orlando Magic on Friday night.

Brooks’ three made 3-pointers in the second half and Jonas Valanciunas’ 14 points and 15 rebounds helped the Grizzlies (32-30) overcome a generally poor shooting performance and defeat the Magic (19-44) in the first of home-and-home games against Orlando on back-to-back nights.

Memphis, which holds the No. 8 seed in the Western Conference, remained 2 1/2 games behind seventh-seeded Portland and three games behind sixth-seeded Dallas.

Cole Anthony and Mo Bamba each scored 15 points to lead Orlando, which lost for the seventh time in its past eight games. Bamba and Donta Hall each had 11 rebounds and R.J. Hampton finished with 11 points.

Kyle Anderson played a major role in that defensive effort with three blocks to go along with his 13 points and six rebounds.

Both teams shot under 35 percent in the first half as the Magic led 43-39 at halftime.

The Grizzlies used a 25-4 surge in the third quarter to break the game open and outscored Orlando 36-15 for the period.

Tyrone Corbin coached the Magic for the fourth consecutive game as Steve Clifford remained away from the team due to health and safety protocols.

Memphis played without Grayson Allen, who is dealing with a left hand injury, and Jaren Jackson Jr., who rested his left knee on Friday.