Grizzlies on brink of elimination against Warriors 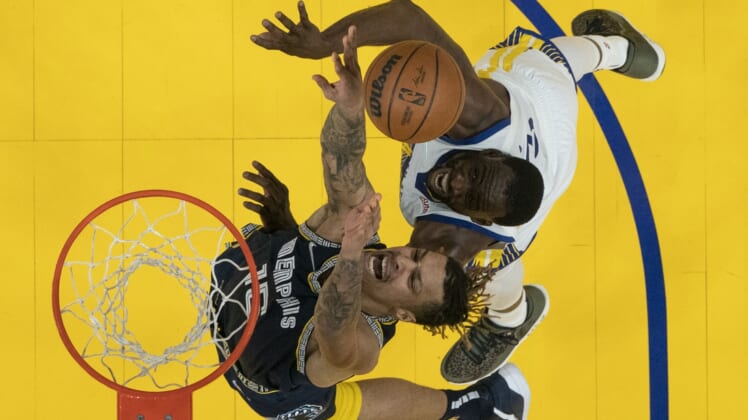 The Memphis Grizzlies face the prospects of being without star point guard Ja Morant for the second straight game when they try to stave off elimination Wednesday night against the visiting Golden State Warriors.

It may not be known until close to game time whether Morant will be available. He injured his right knee in Game 3 and sat out Monday’s Game 4, won 101-98 by the host Warriors.

Golden State holds a 3-1 lead in the best-of-seven Western Conference semifinals and benefited by Morant’s absence while overcoming a 12-point, fourth-quarter deficit.

“Obviously, we are going to continue to work with our doctors to try to figure out what is going on,” Jenkins said.

Morant typically seizes control in fourth quarters and the Grizzlies felt the void while seeing their bid to tie the series slip away.

“It’s a tough one. It’s a tough pill to swallow,” said Tyus Jones, who had 19 points while starting in place of Morant. “It felt like we were leading the whole game.

The Warriors were without coach Steve Kerr on Wednesday due to a positive COVID-19 test. It isn’t yet known if Kerr will coach Game 5 though the expectation is that he won’t travel to Memphis.

Associate head coach Mike Brown — hired to coach the Sacramento Kings earlier Monday — guided the team and is now 12-0 in the postseason while filling in for Kerr.

Still, Golden State wasn’t in good shape when it was trailing by double digits. But the Warriors outscored Memphis by 15 points over the final 10:12 after sputtering offensively to that point.

Golden State star Stephen Curry struggled for the first 40 minutes before scoring 18 of his game-high 32 over the final 7:55 as his team moved within one win of reaching the Western Conference finals.

“We got a little rushed over the first six minutes and it set the tone for some ugly offense,” Curry said. “The open shots didn’t really feel like they were in rhythm. Credit to our defense, that’s what kept us in it.”

The Warriors finally pulled ahead at 94-93 when Curry made two free throws with 45.7 seconds left. He made six more down the stretch as Golden State held on.

“Nothing we figured out, it was just don’t let the first three quarters influence the fact that we still had a chance to win the game,” Curry said. “Shoot the shots you think you can make, play aggressive, take care of the ball. We did all of those things.”

Brown saw a team that kept its cool and didn’t panic.

“A lot of it has to do with the playoff experience that these guys have but their talent and IQ in my opinion is second to none,” Brown said.

Curry also made four 3-pointers to raise his postseason career total to 503. He is the first NBA player to make at least 500 in the playoffs.

Meanwhile, the Grizzlies will be back in front of their exuberant fans with their season on the line.

“You recognize the good things you did and just focus on the season isn’t over yet,” Jenkins said. “It’s 3-1. I told them to forget what the record is in the series. You’ve just got to focus on just winning a game. Just go focus on winning one game right now.”