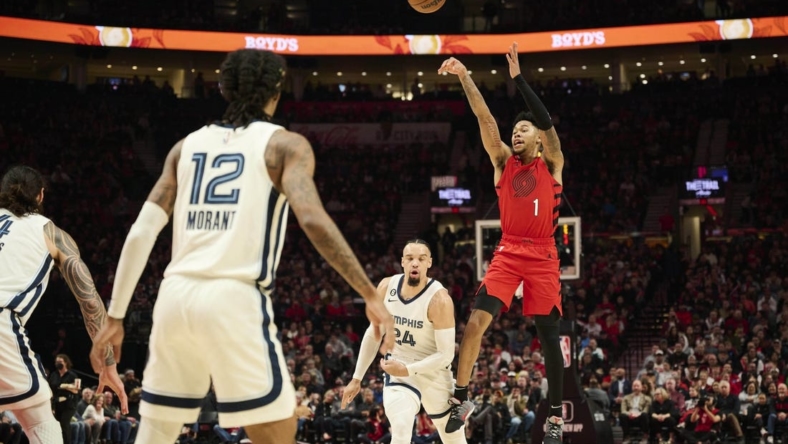 Desmond Bane scored 20 of his 29 points in the fourth quarter and also had eight rebounds and five assists to help the Memphis Grizzlies register a 111-106 victory over the host Portland Trail Blazers on Wednesday night.

Anfernee Simons had 31 points and eight assists for the Trail Blazers, who lost for just the second time in seven games this season. Jusuf Nurkic added 23 points and 13 rebounds and Jerami Grant scored 23 points.

Memphis never trailed but the contest was tied at 100 before Bane tallied the game’s next seven points and the Grizzlies’ final 11.

Bane hit a floater to give the Grizzlies a 102-100 lead with 2:03 left, and then made five of six free throws to make it a seven-point margin with 31.6 seconds remaining.

Grant’s four-point play with 23.7 seconds left made it a one-possession game but Bane made four more straight free throws to boost the lead to seven with 8.4 seconds left as Memphis closed it out.

Reserves John Konchar and David Roddy added 10 points apiece for Memphis, which shot 45.8 percent from the field and made 13 of 28 from 3-point range. Bane was 5 of 8 from behind the arc.

The Trail Blazers made 40.4 percent of their shots, including 13 of 33 from behind the arc. Keon Johnson scored 10 points off the bench.

Bane made two 3-pointers and Konchar added another as the Grizzlies scored the first nine points of the final stanza to take an 87-72 lead.

Dillon Brooks made two free throws for Memphis before Portland answered with three 3-pointers, the first by Grant and the next two by Simons, to knot the score at 96 with 3:39 remaining.

Morant scored 12 points in the first half as Memphis led 52-45 at the break. Nurkic had 15 in the half for the Trail Blazers.

Portland tallied the final five points of the third quarter to trail 78-72 entering the fourth.